When I started redecorating the laundry room for the Fall 2016 One Room Challenge, I knew I wanted to cover the fuse box up in a way that would leave it accessible when we need it, but I wasn’t exactly sure how to do it.

Here’s how the laundry room looked for a few years after we moved in: 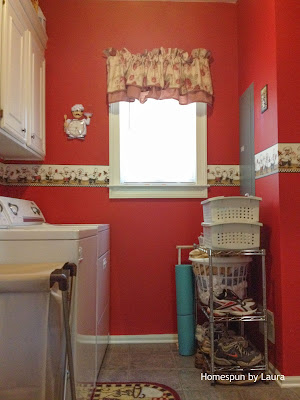 A few more years passed, and we hung a cabinet door from the Habitat Store on the wall to hide the fuse box.  Then as part of the One Room Challenge, I finally removed the wallpaper border and painted the room, but it just looked unfinished without something to hide the fuse box. 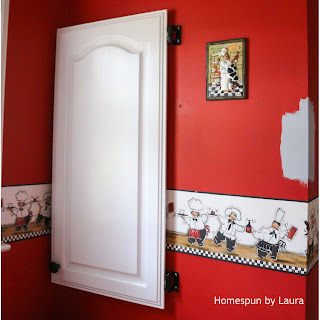 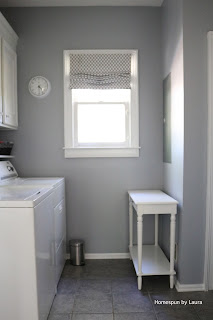 A few weeks before the Challenge began, I came across a Ballard Design catalog and started flipping through it.  I stopped when I got to the page that featured their beautiful beadboard laundry racks.  “Wouldn’t it be nice to have a dedicated place like this to hang delicates and ‘lay flat to dry’ items?” I thought to myself.

Then myself answered, “It would be even better if such a thing could also cover the giant fuse box!”  And the idea for a combined DIY Laundry Rack/Fuse Box Cover was born.

I figured it was likely that someone else before me had thought to make an affordable DIY version of the Ballard laundry rack, so I went to Pinterest and searched ‘DIY laundry rack.’  There were quite a few versions, but the one that seemed to most fit my needs was this one by Centsational Girl.  Of course, hers is much more straightforward since it’s just hanging on a wall and doesn’t need to move in any way to make a huge fuse box easily accessible.  I chose to work from her plans because they were easy to follow and would be easy to modify for my project.

I sketched up a plan in my project notebook, which wound up changing several times as I thought through all the different requirements and moving parts for my particular needs.  I began by measuring the wall and the fuse box to determine the size wood panel I would need. 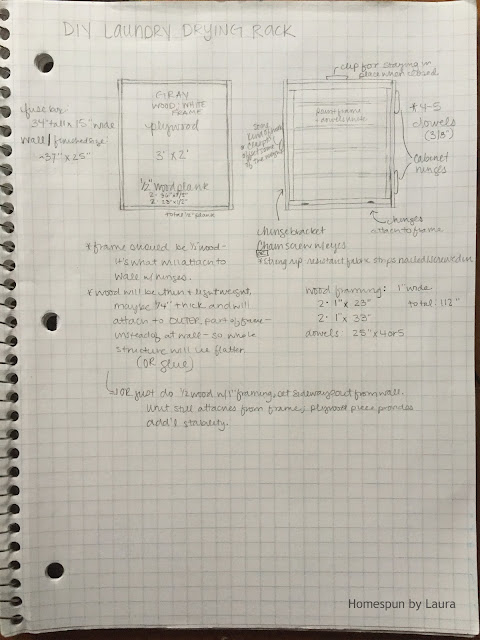 I pretty much followed Kate’s directions for the panel and frame, adjusting where necessary.  Things I had to consider as I drew my design and chose my materials were:

After we had settled on a design, I got to work.  I painted two coats of primer on before we began assembling anything, and when it was dry, we began to assemble the frame for the rack. 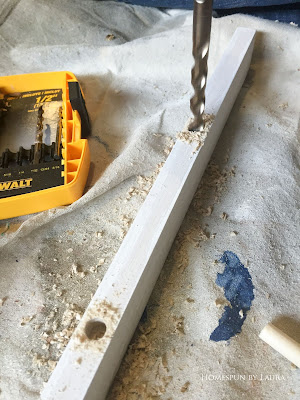 That evening, we almost ran over the project before I had finished painting.  Oops.  If I had known what was good for me, I would have taken this as a sign and just stopped then and there. 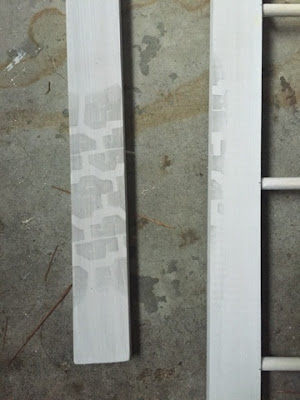 Instead, I set up shop in the garage on a rainy day to finish painting all the wood and spray paint the metal pieces, not realizing how much would need to be repainted after we assembled and hung the rack. 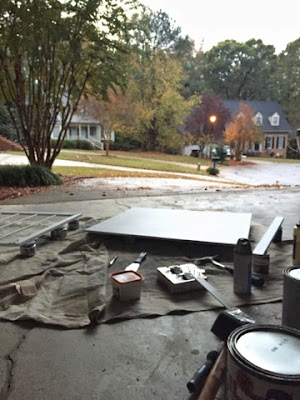 After the paint was dry, I recruited the Mister to help me attach the rack to the panel.  We very carefully marked where the knobs and pin hinges needed to be attached before the drill made its appearance. 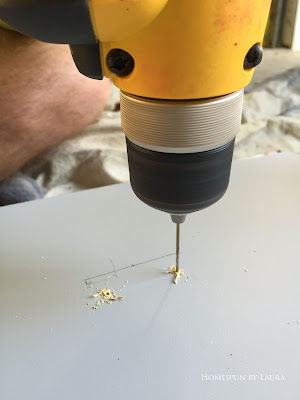 The cabinet hinges also needed to be screwed on to the panel before we could hang it up.  In the middle of this process, we realized we would need shorter screws to prevent them from breaking through the wood on the wall side of the back panel, so I ran out and bought some. 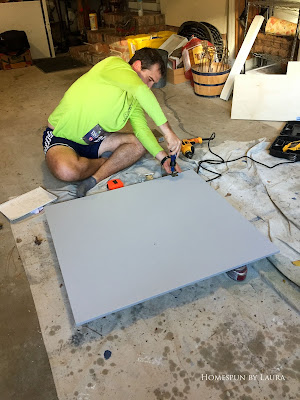 After some adjustments, the rack was on the wall!  It’s huge and covers the entire section of wall.  The adjustments we had to make left some ugly evidence behind, so I had to go back and fill and repaint the holes.  For no good reason at all, I procrastinated for two months, further drawing out the Never Ending DIY Project. 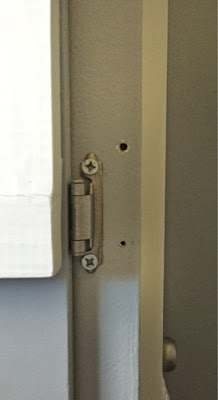 I also had to go back to the hardware store to get shorter machine screws for the knobs, one of which you can see is missing here: 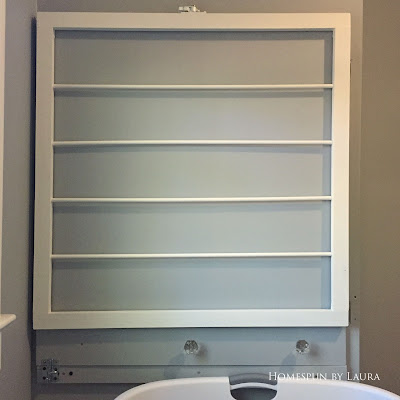 But finally, almost three months after I started…the thing is finished!!  I’m pleased to report that even after all the challenges along the way, it looks great and functions as planned. 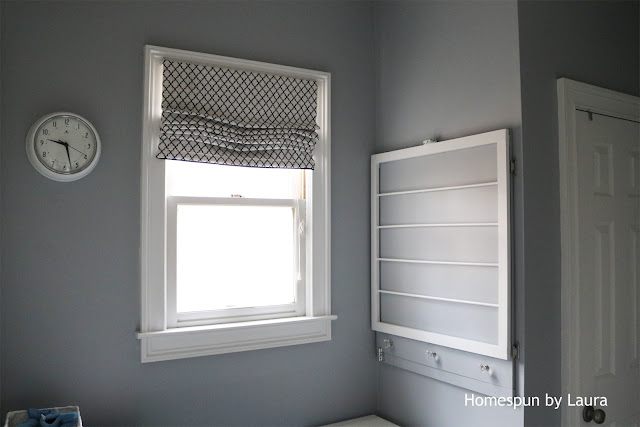 Since the hinges are the only attachment point for this somewhat heavy panel, the additional piece of wood below it helps supports its weight when it’s closed.  When we need to get to the fuse box, we just pop the latch open. 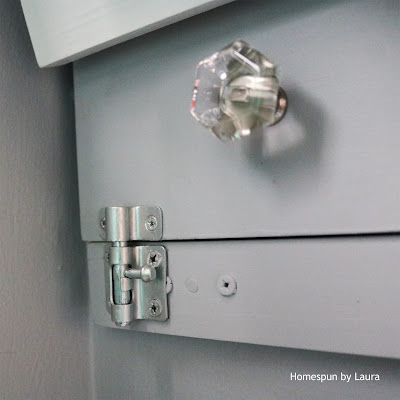 I wasn’t able to find the same hinged bracket (the metal pieces that holds the rack partially open instead of falling all the way open) Kate used for keeping the rack closed when not in use, and the ones I did find weren’t compatible with this particular project, so I came up with an alternate method.  Two lengths of twill tape screwed into the front of the wood panel and back of the drying rack frame did the trick. 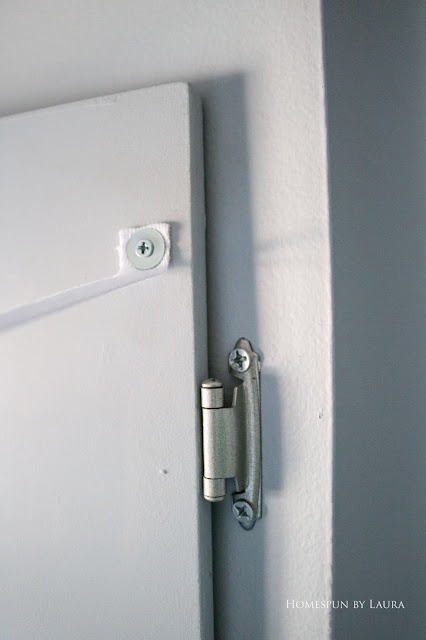 I added the washers after I realized that the screw alone would just break through the twill tape and cause the rack to fall forward.  In addition to the washers, I ironed a small amount of medium-weight fuseable interfacing onto the twill tape to reinforce it and help prevent the tape from tearing. 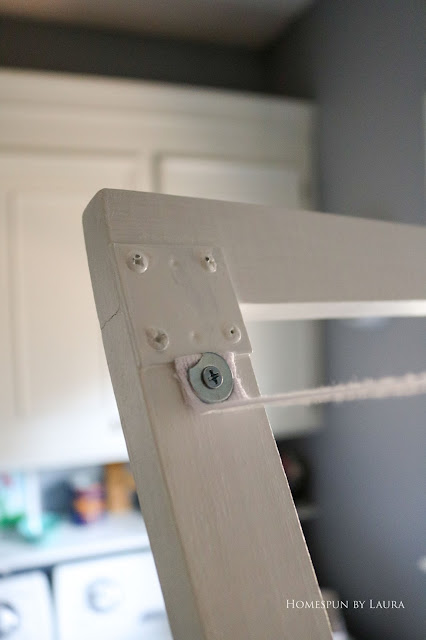 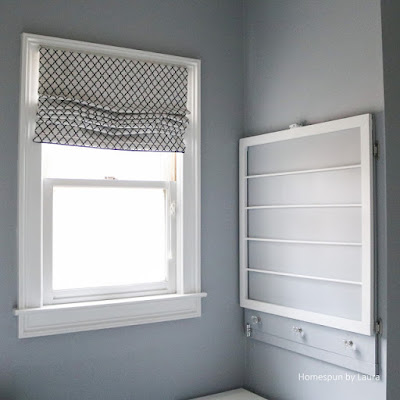 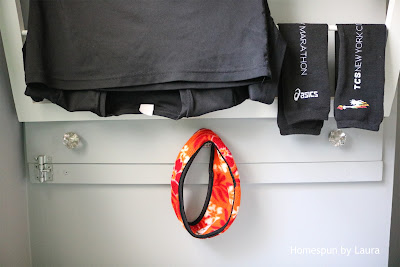 If I open the rack when the panel is closed, the window frame helps to support it. 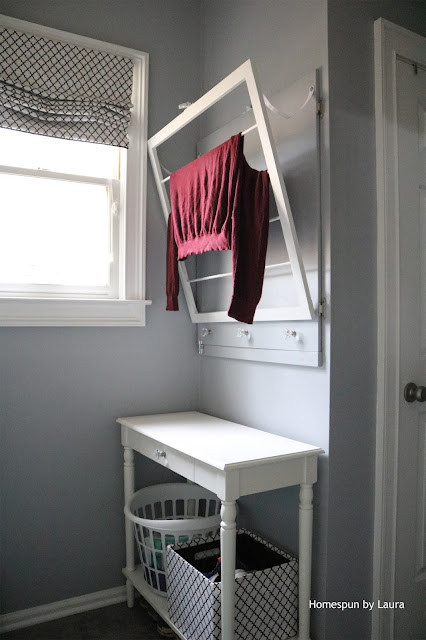 If I need it to hang at a deeper angle, I open the latch at the bottom to swing the entire contraption forward past the window frame before opening the latch at the top to release the rack, which you can see in the next three photos. 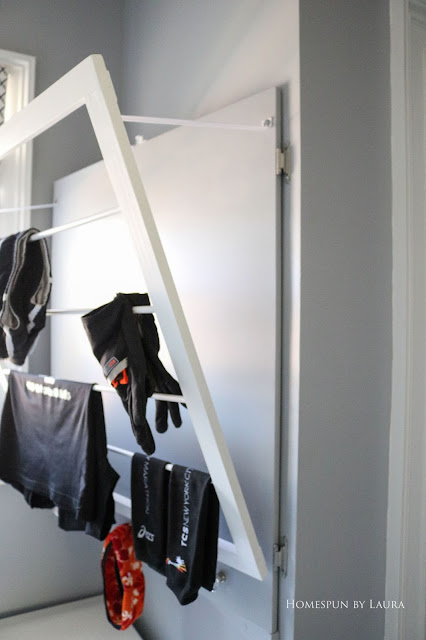 The frame has been great for hanging my sweaty running clothes instead of throwing them straight into the hamper and causing the whole thing to get wet and smelly. 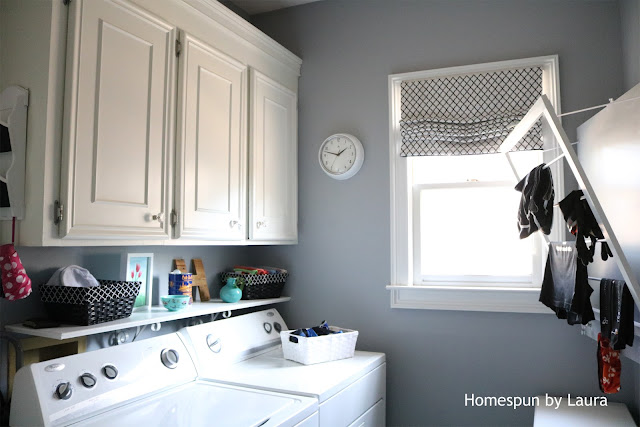 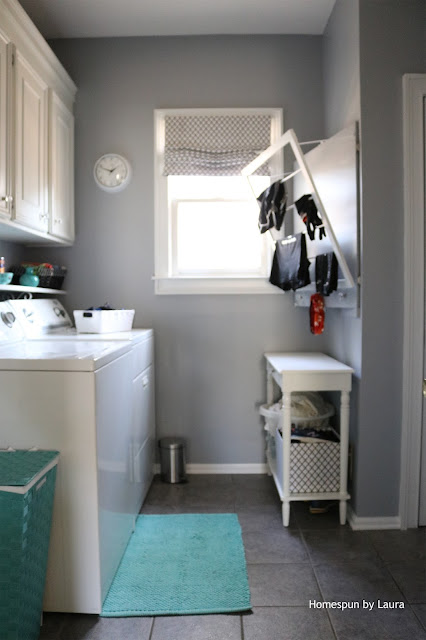 This turned out to be a surprisingly challenging project due to the location of the studs, size of the wall, and the window frame that sticks out about 1/4″ too far, and I’m quite relieved to have it finished.
But I love walking through the laundry room now when I get home or on the way upstairs to the office to work.  It’s such a nice feeling to see the evidence of perseverance and hard work each day.
Do you have projects you’ve wished you hadn’t started but then were relieved to complete?  I’d love to hear about them! 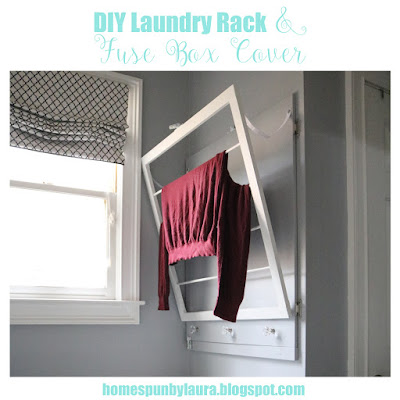 Other DIY projects you may enjoy: 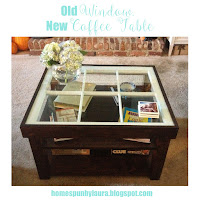 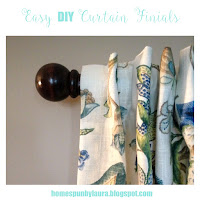 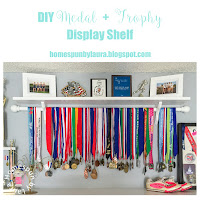 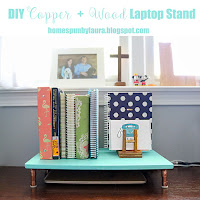