The Mister had a big birthday this year, and I spent the three months leading up to it planning a surprise trip to New York City to celebrate.  I bought the tickets, made the reservations, and planned out an itinerary that I was totally pumped about.  The next step was to come up with a fun, exciting, and original way to reveal it since it was his gift from me. 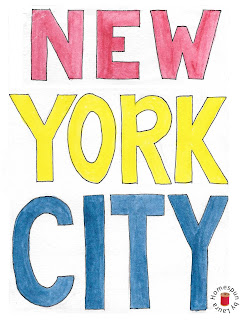 This post has the longest title of any I’ve ever written.  I tried about six different ones, but none of them quite got all three ideas across, and each one seemed too important to eliminated, so there it is.  The award for Longest Post Title Ever goes to this one (and tomorrow’s).

To get some ideas for giving the Mister his birthday gift, I searched ‘how to reveal a surprise trip’ on Google and Pinterest.  I came across a few methods I liked, which I wrote down on a notepad:

I was thinking of doing some combination of the three ideas, but there was about a month remaining before the trip, so there was no rush to decide exactly what the finished idea would be.  I let it all simmer in the back of my head for a week or so until it evolved into my final plan.  I decided to create a scrapbook that would bring the itinerary to life.  I would look for pictures online to illustrate it; I could then add actual pictures and notes to the scrapbook after our trip.  I would ‘wrap’ the scrapbook in a carry-on suitcase along with a few items that would be useful during our trip and give it to him to open as his birthday gift.

But wait…
About 3 weeks before the trip, we went to the lake for a week with his family, and I randomly packed a cheap set of watercolors I bought at TJ Maxx sometime early this year, thinking that I might like to try them on the trip.  I hadn’t touched watercolors since I was 14 and have done very little painting of any other kind (except for walls and furniture, of course), so the one painting I did while on vacation didn’t turn out great.  But it got me interested in painting some more.
I started my little art project by sketching out a few of the scenes to see if they would be good enough to justify proceeding (keep in mind that, like painting, drawing also falls into the category of “I used to do it a lot, but in the past 15 years, I’ve done it very little”), or if I should just stick with pictures from the internet.

The first few practice sketches (which I did in a little sketchbook I had received for my 9th birthday but was still mostly empty) turned out well enough to give me some confidence that things were turning out OK, so I switched over to watercolor paper. 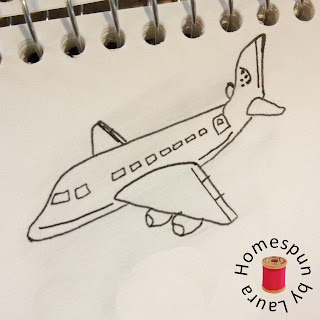 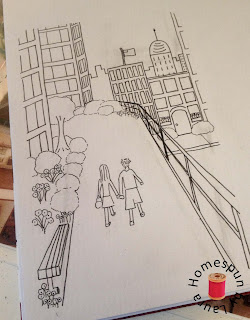 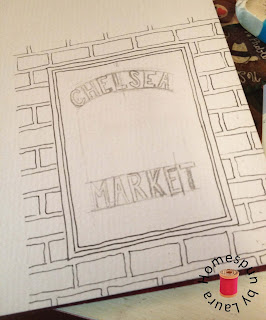 I went through mostly in order, sketching out a drawing for each activity, tracing over the lines with a fine pen, and then painting each one.  For a lot of the scenes, I had to refer to pictures online since I’ve never been to or seen them, but I did my best to draw them as though I were sitting there in person with pen and paint.

I’d forgotten the feeling that comes from creating a piece of artwork, of getting out onto paper the image that’s in your head.  It’s totally different from the sense of accomplishment that comes from decorating or sewing or painting furniture.  Probably the fact that the paintings were secret made the feeling that much stronger, since I couldn’t run downstairs and say, “Hey, look what I painted!”.  As the days progressed and my little stash of hidden paintings grew, so did that happy feeling, surely amplified by the anticipation of sharing my paintings with others, the realization that I can actually still draw and paint, and of course, the excitement of our upcoming trip, which I had to be doubly excited for since the Mister knew nothing about it.  For about a week there, I felt like I was just going to burst.  It was awesome.

Once I had completed the paintings, I turned my attention to the putting the scrapbook together.  I didn’t have an empty scrapbook available, so I found a partially finished one, removed its contents, and got to work.

For the first page, I came up with a few hints to give the Mister an opportunity to guess where we were heading, including:
“It’s surrounded by water on 3 sides”
“You’ll need to pack comfortable shoes”
“The activity that inspired this trip has influenced
American pop culture for the past 40 years”
The idea was to get him thinking of Florida, with the pop culture phenomenon potentially being Disney World, which opened in 1971 (see Sunday’s page below for more on the actual answer to hint #3).  His guess was Key West (we went there in 2010 for the first time and have talked ever since about going back – lately, quite frequently), so my misleading clues were a success!  I managed to surprise him.

Here’s a peek at the itinerary through the paintings, which took about 7 days to complete: 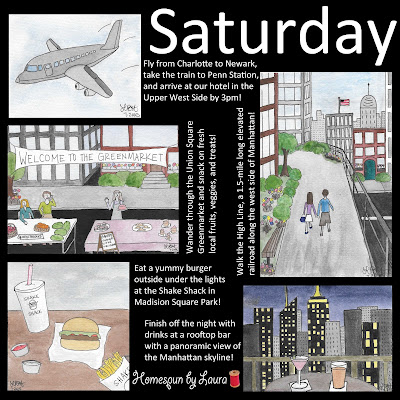 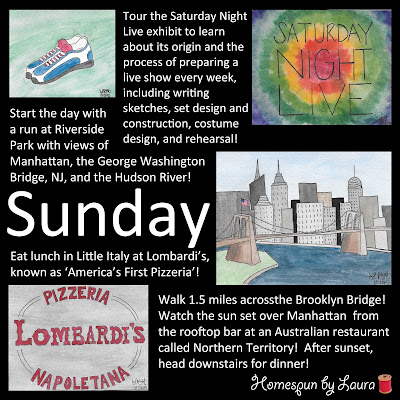 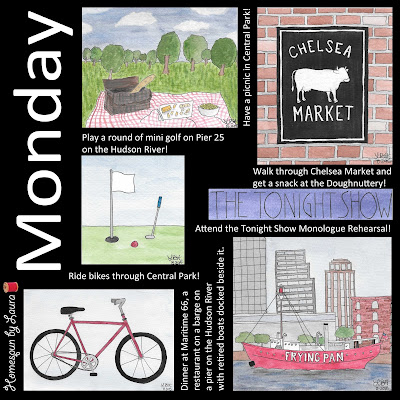 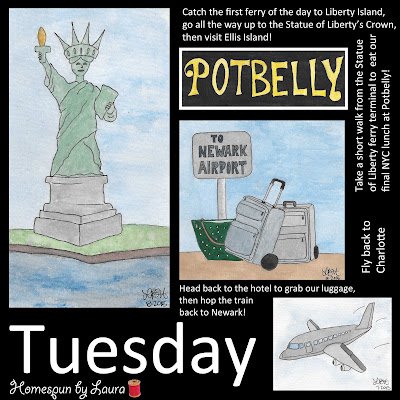 Of course, if you don’t have 7 days to spend painting or don’t have an interest in painting, you could do something similar with photos from the internet like my original plan – quick, easy, and fun!

It was a strange feeling when I finished it.  I had actually written out a narrative (in future tense), like I do for a regular scrapbook (which is, of course, in past tense), and by the time I finished it, I felt like I had already experienced everything on the itinerary – but it was still a week away!

When I finally finished the process, I ‘wrapped’ the book in one of our carry-on suitcases, along with a few other items: a book for the Mister to read during our flights, some travel sized toiletries, and our padded bike shorts (fortunately, we both already own a pair – and they made our 4-hour bike rental much more bearable!). 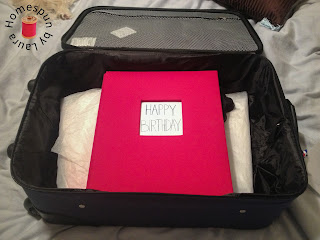 I also made us both a new luggage tag from one of the paintings, which I attached to our suitcases with a patriotic ribbon. 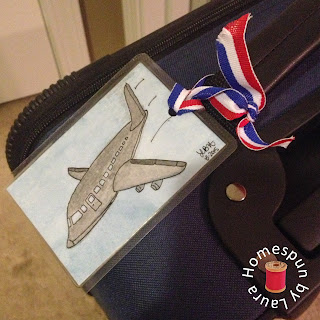 I chose to travel with carry-on luggage for a variety of reasons; the main three are:

I was a little worried about traveling so light because we’ve never done it.  It usually looks like we’re moving when we pack up to go on a trip.  While being so well prepared eases a lot of stress while traveling, we do have a habit of packing way too much, so it was an interesting challenge to pack in two carry-ons and two personal items.  But I’m happy to say that it was a complete success and I plan to work on making it our new habit!
Something I wanted to do while on our trip was to extend my art project into a photography project by taking a photo at each activity/location with my painting in the foreground and the scenery in the background.  I didn’t want to risk losing or ruining the originals, though, so I scanned all the images and had individual photo prints made from them.

To keep them organized, I created an envelope for each day to hold the paint prints that corresponded to that day, along with a small copy of the itinerary with addresses and directions in case our phone batteries died and we couldn’t access our digital copies.  Each morning, I put that day’s envelope in a pocket in my purse that seemed to be made for holding a small envelope and keeping its contents from getting wrinkled or torn.

Sometime in middle school, my best friend and I bought these identical bags at American Eagle, and I used mine a LOT back then.  I hadn’t used it since probably 8th grade, but of course hadn’t gotten rid of it.  It was perfect for this trip; it held everything I needed but was lightweight enough that I never got a shoulder ache.

Check back for Part 2 of this post, which will feature photos from our trip, including the ones I took with the prints of my paintings…here’s a preview to hold you over 🙂

Thanks for reading.  If you’re here because you were actually looking for ideas to reveal a surprise trip, I hope this helped!! 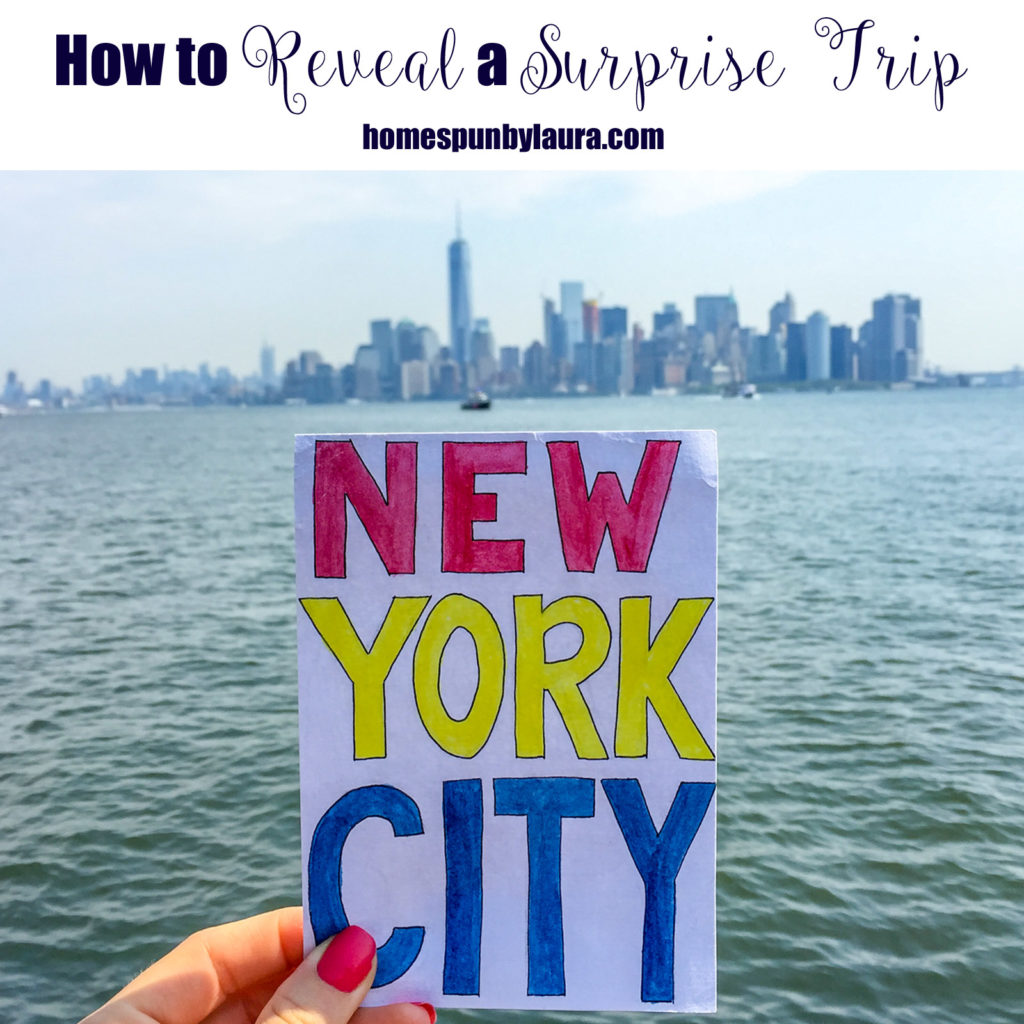