I’d love to report that I’m working at my new desk in my new office, but unfortunately I am not.  It’s 58 degrees in there, so I have retreated to the kitchen table.  It’s unfortunate because my dislike of trying to work at the kitchen table was one of the reasons I was so motivated to transform the office space.  But the window unit is still sitting on the floor in front of the window and I’m cold-natured to begin with, so sitting at a desk would make it hard to type as the blood retreats from my fingers into the core to keep the vital organs working.  Kind of reminds me of sitting in my old office at my former job, which was at a gym, so it was always frigid.
You may be thinking that it’s ironic that I’m discussing how cold it is upstairs when the subject of this post is a bathing suit cover meant to be worn in the heat!  I agree, the timing of this post might seem a bit strange to those in the Northern hemisphere, but for the other half of the world, summer is approaching!  And there are also those folks living nearer the equator who enjoy temperatures in the 70s and 80s all year long!  Here’s the reason I’ve been wearing a lightweight beachy dress: the week before Thanksgiving, we headed down to the islands for an early surprise trip for my birthday, which is still a couple weeks away!  The timing was perfect since we left a few days after the completion of the One Room Challenge and I was ready for a little break!
For a bathing suit cover to wear around the resort, I packed the dress I made over the summer out of an old wrap skirt I found for $1 at Goodwill.  I wore it back in July on vacation at the beach, but after those first few wears, I noticed that it needed a couple of adjustments.  I made those at the end of the summer, so this was the first time I was able to enjoy the totally finished version.
It started out as a little-bit-too-big wrap skirt.  The easiest way to convert this would have been to cut a few inches off the bottom, create straps out of them, and call it a day.  But I wanted to fully cover my shoulders and back so that I would have plenty of protection when the sun gets to be too much.  This happens after about 30 minutes on the beautiful (but HOT!) beaches of South Carolina in July, which is when we usually visit.
I began by draping the waist of the skirt over the shoulders of my stunt double and pinning darts on the back and shoulders to create a neck.
Once the neck had started to take shape, I ‘closed’ the wrap, pinning the ends into my stunt double to make the marks for where to attach the belt and inner tie.  I let the rest of the original waist of the skirt drape inside to make the neck into a nice V-shape. 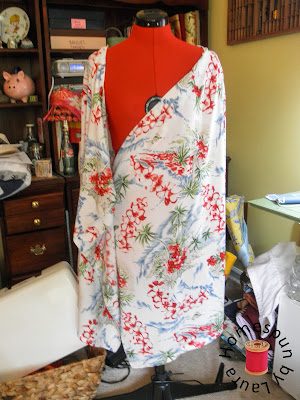 I found a scrap of black fabric to use to create the inner tie.  I stitched it into a long tube, then cut it in half.  One length was attached to the outer wrap section at my left hip, and the other was attached at the left hip on the interior section. 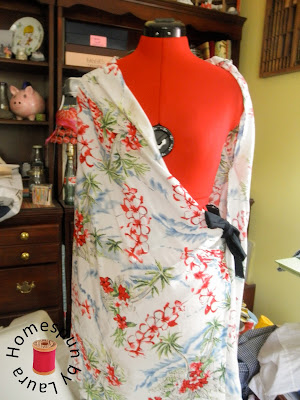 This is one of the things I had to change after a few wears; I made the tie too wide, which left a big lump under the dress until I went back and made the tie narrower so the knot would be smaller. 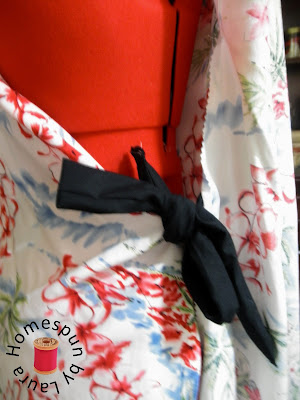 Next, I adjusted the length of my new dress.  About 3” came off the bottom, leaving a perfect piece of fabric to create a belt.  I stitched the scrap into one long tube, then cut about 1/3 of it off to create two separate belts.  The short length got attached at my right hip, and the long piece got attached to the end of the front wrap section. 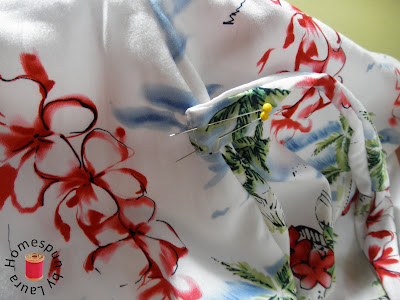 The final step was to create sleeves/arm openings.  This was a bit challenging, and they turned out a little lopsided.  I basically used a seam ripper to open up several inches along the original side seams.  I was pretty focused on making sure I didn’t make the sleeve openings too big and I forgot to take pictures, so there are no pictures of this step.  Once I was satisfied with both armholes, I pinned down the unfinished edges and stitched.
And then I was finished! 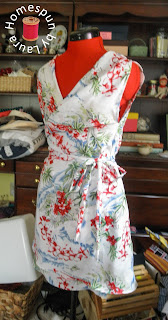 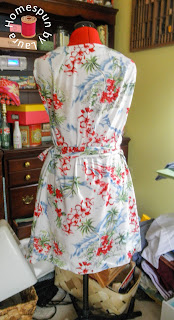 I was a little disappointed that the dress fit the stunt double better than it fits me – but if I were to stand stock-still, it would stay put and fit me just right, too.  As you’ll notice in some of the photos, it tends to become a little lopsided when I move around, and the strong ocean winds in Punta Cana didn’t help keep it in place! 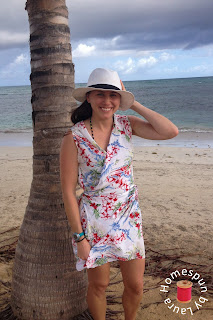 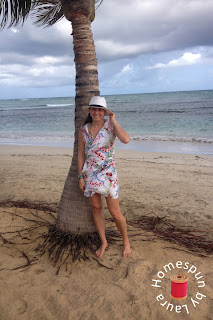 Immediately after these photos were taken, we ran for cover from the brief but heavy rainstorm, then headed back to the beach, where it was all blue skies, distant puffy white clouds, and bright sun…just in time to head back to the room and finish packing (after one last photo)!

Three days on the island didn’t feel like quite enough, but it’s better than no days on an island!  We headed home and prepared to host a group of friends from college for our 11th annual Thanksgiving Before Thanksgiving the next day!


Thanks for reading!  Check back later this week; I’ll be sharing the coffee table I made (with help from my father-in-law) from an old window.