Today I’m coming to you from a shaded table on the sidewalk outside of a restaurant downtown.   I’ve got a nice view of a fountain across the street and recent college graduates walking around in their black gowns, surrounded by family members.  It’s a nice change of pace from blogging on our new couch, which is really unproductive because it’s so comfortable it just makes me want to take a nap.  I really should get around to creating a new office space with a dedicated area for the computer soon.  But first, I must finish the den project, which brings us around to curtains.

Last week, I shared how I made inexpensive curtain rods and finials from wooden toy/craft pieces and brackets from random hardware pieces, and this week, I’m going to share with you the curtains that now hang on said rods. 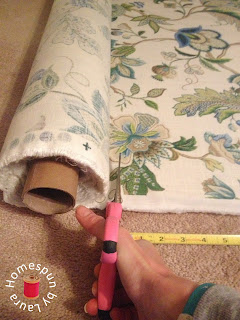 I made tab-backed curtains so they would be able to hide the DIY brackets, which are great and functional but aren’t exactly pretty. I decided to make my own tabs from a couple scraps of off-white linen that was too narrow to do anything else with.  I started by trimming the pieces of linen down to size, ironing, stitching, and pinning them to the back of the finished curtains.  This process took ages, so I would highly recommend the bias tape method shared here, unless you just like to make things difficult for yourself (which seems to be one of my favorite things to do…).  The silver lining of all of this is that the linen tabs will hold up basically forever since double-folded linen definitely stronger than the thin fabric that is used to make bias tape, and these curtains are fairly heavy.
Instead of creating each tab individually, I saved some time by stitching up a couple long pieces of fabric and cut them down to lengths of about 4” each, then folded and pressed about .5” at the top and bottom of each. 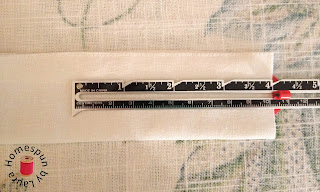 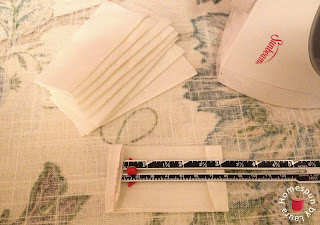 Each curtain panel took 9 tabs, making for a total of SEVENTY-TWO TABS!
After creating all the tabs, I folded and pressed the top edge of the curtain panels as though I was making a regular rod pocket.  Then, instead of pinning that down and stitching as you would for a regular rod pocket, I unfolded it and pinned the tabs to the right side of the fabric that forms the back of the regular rod pocket.
I assembled the curtain this way so that if at some point in the future, I decide I want to use these curtains with a different rod, there will be a rod pocket, AND in the meantime, the stitches from the tabs won’t show through on the front of the curtains.
I then stitched down the top and bottom of each individual tab before going back to stitch across the hem/rod pocket of the panel.  And then repeated the process seven times for the remaining panels… 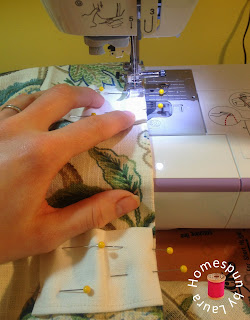 …which resulted in a LOT of thread to be trimmed!
Days later, they were ready to be hung!  I had to wait for a few days for the Mister to get around to hanging the rods for me (That’s how things work in our house – I make the things and then he hangs them.  If I were to hang things, everything on our walls would be crooked because I’m too impatient to mess with the level.).
Even though I cut the fabric for each panel to the same length and used the same measurements for their top and bottom hems, they somehow wound up with slightly different lengths (Does anyone else ever have this problem?  It happens to me almost every time I make curtains, no matter how much care I take to use the right measurements.), so I left the bottom hems pinned as I hung them.
Once they were up, I made minor adjustments to make sure they were all the same length, toting the iron and board around from window to window to press the final hem into place…and then bringing the sewing machine around to each one, too.
The end result was 8 panels with the perfect length.
The curtains didn’t fall exactly right after being finished, though, so I made these inexpensive DIY curtain weights, and the result is excellent.
It was so rewarding after all the work on the curtains and the rods to see them hanging up! 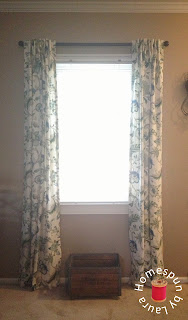 They look just beautiful against the dark wood stain on the rods, and the color they bring to the room is fantastic.  But – they clashed with the sort-of Roman shade I made for the door to our patio about five years ago, so my work wasn’t finished yet!
I had a leftover scrap of curtain fabric that was exactly the right size to make a new (real!) Roman shade to replace the bright yellow one.  Since the yellow shade wasn’t a REAL Roman shade, it didn’t require any lining and let a lot of light through, even when closed (which it usually was since it was a pain to open and close).  The new curtain, being a real Roman shade, would require a lining, and I didn’t want to block out any of the light that the linen lets through.  As I’ve said before, the house is just so dark to start out with, and we need to let in all the light each window will allow.
Lucky for me, I found a perfect lightweight lining on the remnant table at the fabric store for under $5, so the cost of the project was pretty low since the other supplies I used were leftover from the Roman shade I made for our laundry room last year.  I more or less followed these instructions.  They’re really straightforward and easy to follow and have resulted in two lovely Roman shades in our house, which will probably be followed by a few more in the years to come.
Now, finally, the curtains are finished and there’s a cohesive look across the entire back wall. 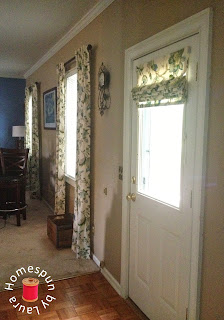 And plenty of light still filters through, even when the shade is closed.  It’s also SO much easier to open and close than the old one. 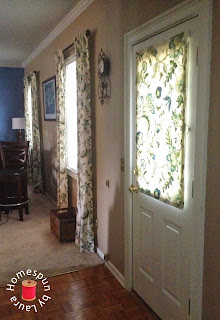 I’m now working on some matching throw pillows for the couch and newly upholstered chair.  This room is slowly but surely coming together and I’m excited to continue sharing the progress!
Thanks for reading,
Laura