April 29, 2015August 23, 2017
I’m back today to share my DIY curtain rods and finials with you!  These were a fun project to work on, and paired with the new curtains, they really make a big impact in the room.  The best part?  The materials came in at under $11 per window and it took only an afternoon to make them (ok, so that’s two parts)!
When I started out, I really wanted to make my own rods from a thick wood dowel, brackets like this one:

…but I was trying to keep the cost down as low as possible.  Combined, these would have cost about $25 per window!  Since the 18.5 yards of fabric I had ordered for the curtains and some coordinating pillows was $22/yard, I needed to save as much as possible on the rods.  After a thorough but unsuccessful search of the wooden craft sections at Lowe’s, Michael’s, Hobby Lobby, and JoAnn’s and a few websites for the exact items I wanted at a more reasonable price, I decided to get creative and find a cheaper way to get a similar look.

So I went to Pinterest, where I found a wide variety of DIY curtain rod options, but they were all either:

So it was back to the drawing board.

While perusing the drawer full of wooden hobby pieces in the hardware aisle at Lowe’s (my favorite aisle in the whole store!) to get some out-of-the box ideas, I came across these wooden toy wheels in a variety of sizes.

It occurred to me that these might be just the thing I needed to create a dressed-up version of the rods described in #3 above and mimic the look of the pretty finials I wanted.

The largest wooden balls available at Lowe’s were too small, so I headed to Hobby Lobby, where I found 2″ wooden doll heads, which were the perfect solution.  They had one flat side and were pre-drilled and worked perfectly with the little toy wheels.

Here’s yet another way to make your own inexpensive curtain rods and finials.  As if there weren’t enough DIY curtain rod options out there already…

When I arrived home with my supplies, I got straight to work on the new rods so I could hang the new curtains as soon as I finished sewing them.  I decided to assemble the pieces of my curtain rods before staining them.

For each window, I laid out: 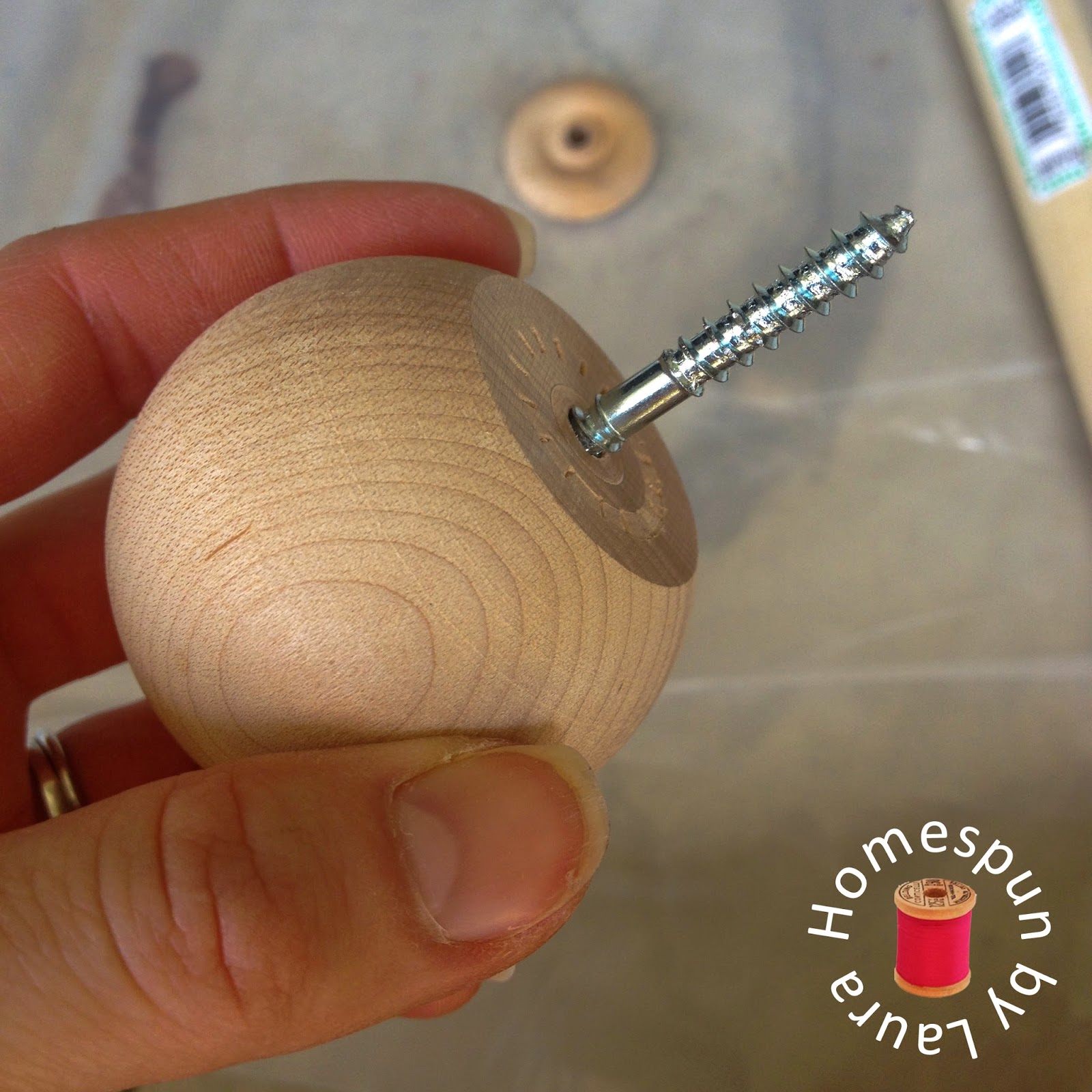 The pre-drilled holes in the toy wheels were large enough that they slipped on to the screws easily with no twisting. 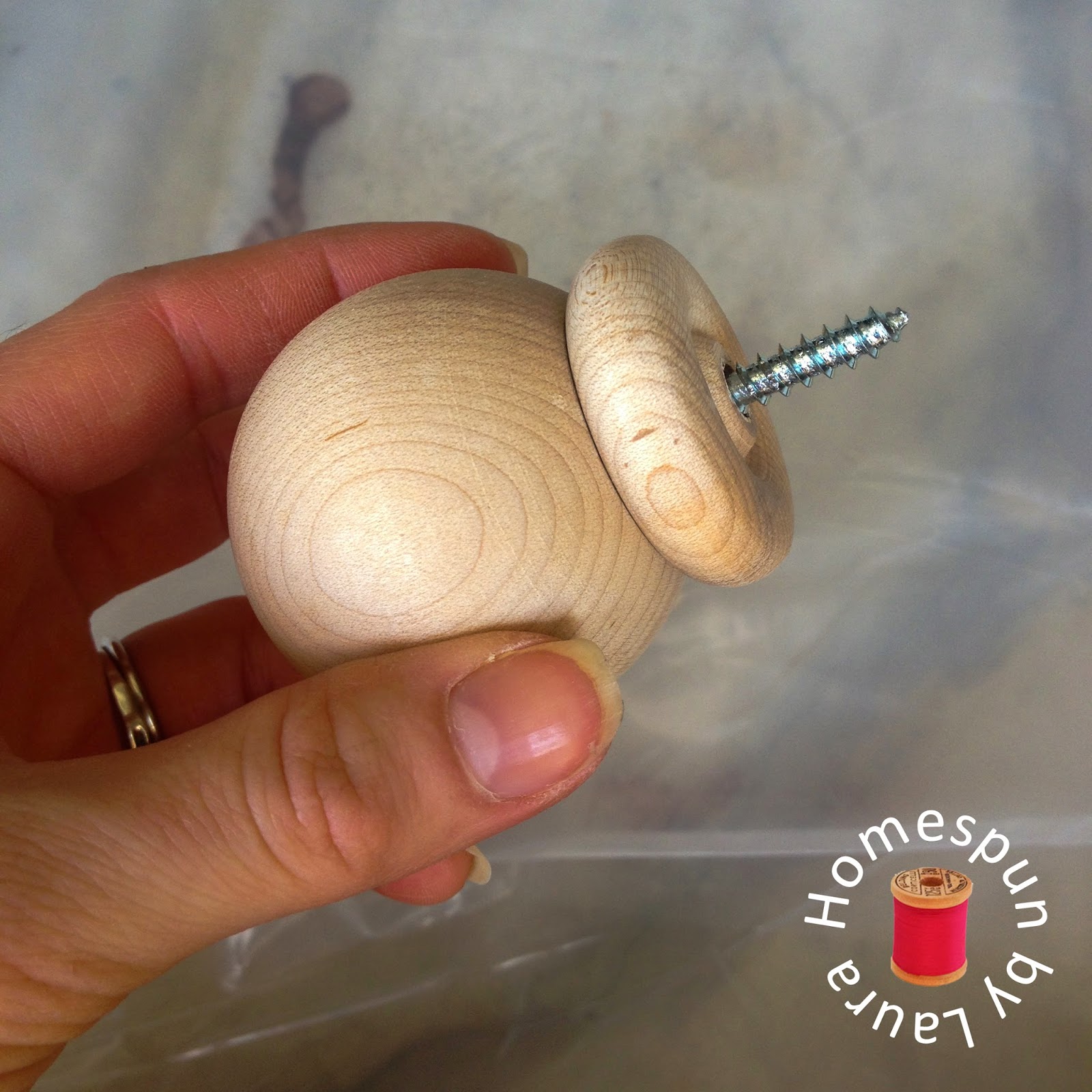 I put a tiny drop of wood glue between the doll heads and the wheels so they’d stick, then let them dry while I moved on to the next step.

The next step was to cut the dowels down to size.  The two windows on the back wall of our den are wider than the ones on the front, so I only had to cut down the rods for the front two windows.

I made my measurements and grabbed a saw.

The last step before staining the rods and finials was to drill a pilot hole into each end of the rods.  this step was difficult since I was both holding and drilling, so the holes are not all perfectly centered.  Even I can’t tell when looking at them on the wall, though, so I know no one else notices, either.

It turned out to be easier to get the screws in without the doll heads already on them (the screws just kept going farther into the heads instead of into the rods), so I removed my new finials from each screw and reattached them after the screws were about halfway inserted into each end of the rods.

I pulled out my favorite stain and spent the afternoon going back and forth between staining and sewing (and scrubbing my hands well in between!).

There’s not a huge difference in size between the diameter of the rods (1-1/8″), the wheels (1-1/2″), and the doll heads (2″), but once the curtains were added, the rod is basically hidden so it’s not a big issue.  Still, if I did this same type of rod in another room, I would probably go for slightly larger wheels and heads.

I saved even more dinero by making my own wall brackets.  This genius idea saved me about $30!

I constructed the curtains so the brackets would be hidden since they’re not incredibly pretty (more on that in another post), but spray painted them a bronze color so they’d blend better.

I thought I was finished at that point, but after the curtains had been hanging for a few days, I realized that the rods weren’t quite wide enough; the curtains blocked too much of the window and each window looked a little crowded.  To solve that problem, I took the two leftover 8″ sections from the front two rods and cut them down into 5″ (for the front windows; they needed more additional length than the back) and 3″ sections to add a bit of length. 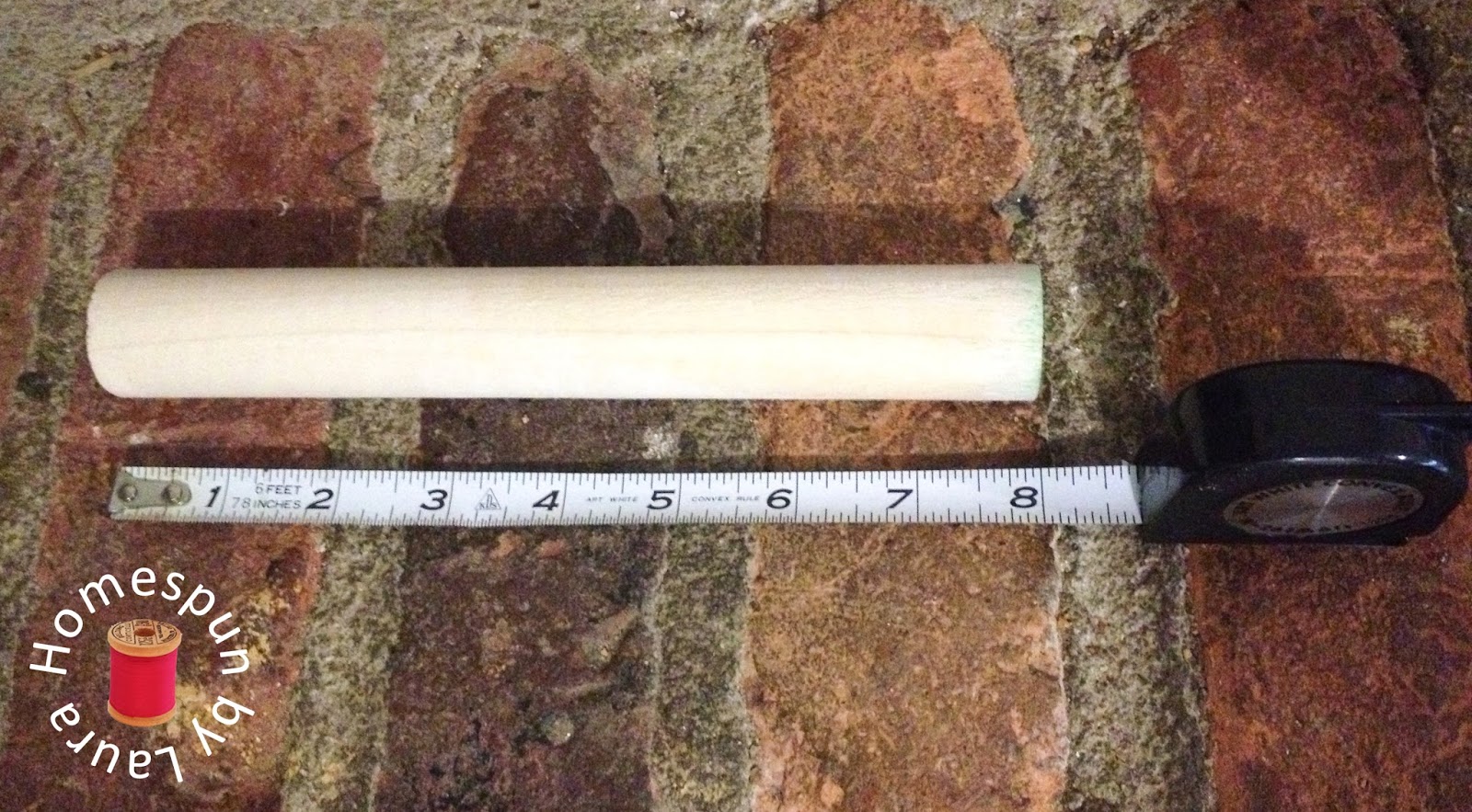 All I had to do was stain them, drill a hole in each end, and add an extra dowel screw.  To add them to the existing rods, I unscrewed one finial from the rod, screwed the finial to one end of the extension piece, then twisted the combined finial and extension piece back onto the end of the rod.  This is also how you would combine two dowels to create a rod for a wide window.

Just like before, I couldn’t get the holes drilled exactly in the center, so they are a little uneven. 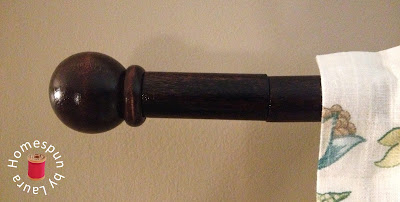 Once the curtains are spread out in place, though, you’d never guess it. 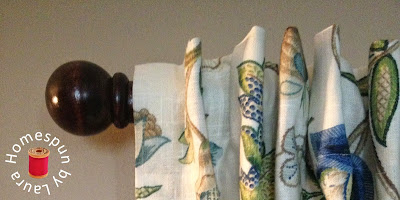 I’m having trouble getting a decent picture of the finished curtains; the room is so dark and the light coming through the windows is so bright, so the iPhone picture doesn’t really do it justice.

Now, for the first time in the six years we’ve spent in our house, we have curtains on all four of the windows in our den!  It’s pretty exciting. 🙂

Here’s a breakdown of the expenses for these projects:

Compare that with store-bought curtain rods – or even premade materials for DIY rods!  The materials for the rods I originally wanted to make would have set me back $53.34 PER WINDOW FOR FOUR WINDOWS – over $200 just for the materials!  Store-bought rods on the scale that I wanted would also have come in somewhere in that ballpark.

Next week, I’ll share more about the curtains and how I hid the DIY brackets behind them…and if I’m really industrious, I’ll share the chair and ottoman I reupholstered, too!

I hope this post helps you save a couple hundred bucks curtain rods in your house, too! 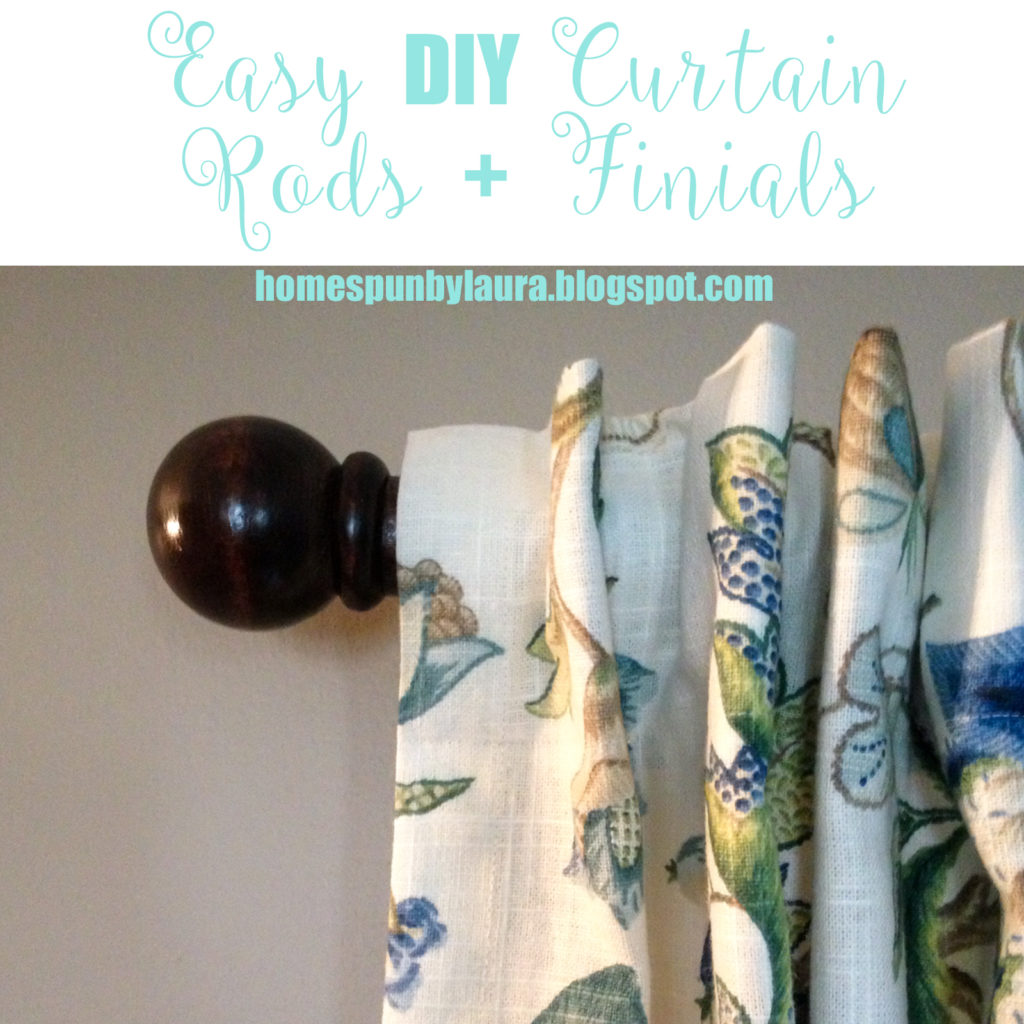