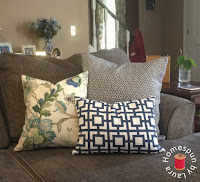 It’s a cool rainy afternoon here, so I’ve opened up the windows to listen to nature’s soundtrack as I work.  It’s quite peaceful and a nice change.  But – let’s move on to the new couch and pillows!  Our couch was delivered in early March, so some of the new-ness has worn off (and Pipsqueek broke it in quickly by throwing up on it the day we got it…but I cleaned it right away and you can’t even see a stain!), but we’re both still very excited about it and the changes we’ve made in the den so far.

When we first moved into our house, we were a little perplexed by the layout of the den, which you may have already read about here.  Because it’s such a long and narrow room, the only place that really made any sense to put the television was directly above the fireplace, and that has dictated where we can put the rest of our furniture.  We do actually use our fireplace (fun fact: neither of the families that lived here before us had ever used it; we built the first fire this house had ever seen 20 years after it was built!), so the couch also needed to be close enough to enjoy it.  But even with the right placement, it’s never really felt right.  There was still so much unused and empty space in the room, and we didn’t have enough seats for everyone to sit comfortably if more than one or two people were over.

The old couch was the inexpensive one we bought for our first apartment when we got married, and it had worn out its welcome.  In addition to the size issue, it wasn’t the most comfortable thing I’d ever sat on (it made my neck hurt when we watched TV), and I couldn’t stand the faux suede texture – it made my skin crawl.  And…the dogs loved to lie on the cushions and lick them, so it had little spots all over it.

So on a rainy February afternoon, we went out furniture shopping and within two hours, we had decided on a couch.  Originally, we were looking for a light tan/off-white sectional with the extra chaise on one side.  We went to two stores total and sat on maybe eight couches, none of which really stood out.  Once we sat on this one, we immediately knew we could stop looking.  Initially, I was disappointed that it only came in gray, but I think it will be good for covering dirt and other stains in the long run (as was proven by little Pipsqueek within hours of its delivery!).  And, as it turns out, it works with the rest of the colors in the room pretty well (but if you’re a real interior designer, I’d love to hear your educated opinion!)

While we waited for the new couch to be delivered (it took over 2 weeks!), I tried the rubbing alcohol trick on the old couch, which did a good job of cleaning up the little lick spots the dogs had left on it.  It went on its merry way, leaving a wide open space. 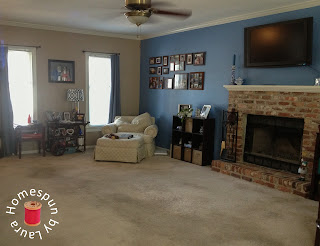 I felt bad for the delivery guys as I watched them carry the couch up the giant hill, only to then have to heave it up the front steps.

As soon as the delivery men left, I laid out the fabric samples for curtains, pillows, and upholstery I’d received a few days before, and we decided to move on ahead with them.

About a month later, after the curtains and chair were finished, I moved on to making throw pillows with the remaining fabric.  The three that came with the couch didn’t match anything, so I reused the filling from them in some of the new pillows to save a few bucks.

Before I cut any of the fabric out, I used Photoshop to create a few different versions so we could both visualize them and so I could make sure I used the remaining fabric to its fullest potential.  There was less of it left than I’d anticipated, especially the curtain fabric since I added the Roman shade on the back door, so I had to be careful about how I used it.

We decided on the simplest option, and all the pillows are now complete!


It’s starting to come together in here!  With the addition of the couch and pillows, the room feels more finished and evenly balanced; the huge couch really fills up the space and makes it feel more homey.  More than three people can fit on it quite comfortably, and when no one is sitting on it, the dogs certainly enjoy cuddling up among the pillows. 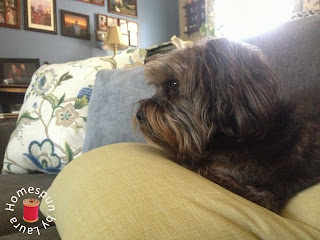 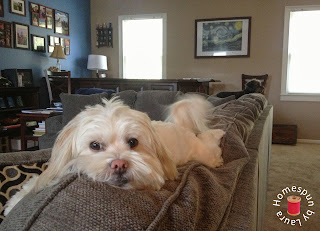 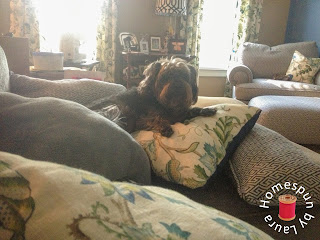 As always, thanks for reading!  Later this week, I’ll share how I salvaged a three-legged nightstand that I found on the side of the road…