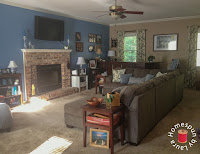 Well, it’s finally time!  This months-long redecorating effort is (for now) complete and ready for its internet debut.  If you’ve been following along for the past couple of months, this is just a summary wrapping up the projects you’ve read about already and showing the room as a whole.  If you’re new here, though, grab a snack or a drink (or both!) and get comfortable – there’s plenty to catch up on!

As a reminder, here’s how the room looked in February, when I officially started redecorating the room and the majority of changes began to take shape: 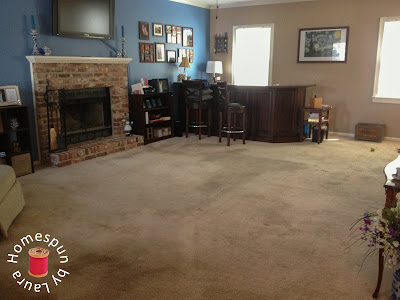 And then we (well…mostly I) got to work.

I started with the dustiest project first, back in December: refinishing and painting the banisters and staircase…and vacuuming up all the dust that sanding inside produced.  The banisters got a new two-tone look, and the staircase walls and upstairs landing area (plus the trim and a few doors, too!) got a fresh coat of paint, covering over the last bit of mustardy-yellowy-tan left over from the previous owners.  And the crayon markings their kids had left on some of the doors.  And the sparkly nail polish their kids had painted onto the handrail.  They had creative kids, it appears. 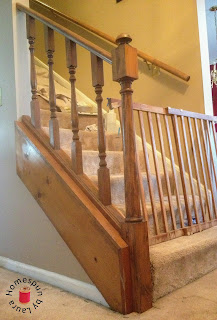 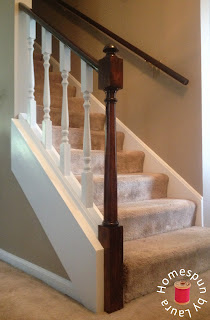 Above: Before and After
Below: View into den from bottom of stairs 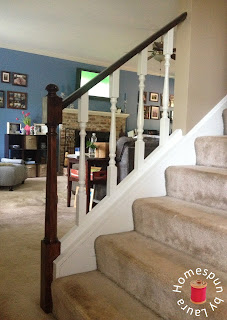 Next up was selecting our new couch, which was delivered in early March.  After over three months, we still both love it.

So do the four-legged members of the family.


As soon as the couch had been delivered, we made our final fabric selections, and I got to work on our curtains the day the fabric arrived. 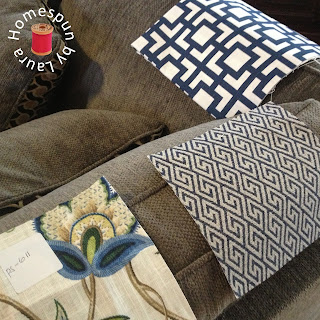 As I wrapped up work on the curtains, I took a few trips out to the garage to stain and assemble our curtain rods with DIY finials, which I made from wooden toy pieces available in the unfinished wood aisle at most craft stores.  To cut down on cost a bit, I made my own brackets out of inexpensive hardware supplies. 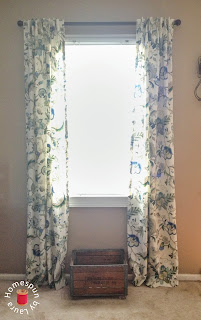 I made the dog toy box from an antique milk crate and drawer pulls last year, but mainly the only time the toys actually go in it is when I’m vacuuming.  Otherwise, they’re spread around the floor in the den and kitchen for the little puppies to enjoy (and the humans to stumble on).

Once both the curtains and rods were complete and hung over the windows, I moved on to the biggest project yet: re-upholstering the big armchair and ottoman. 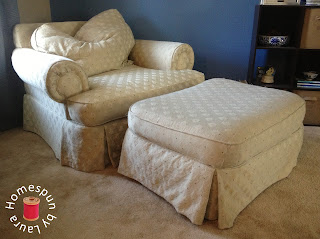 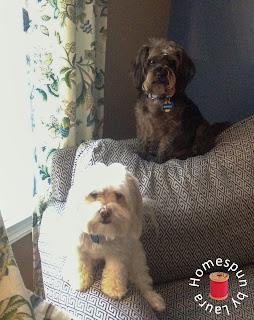 Throw pillows came next.  I kept two pillows we already had and made the rest myself.  All but one are made from the same fabric as either the curtains or the chair; the one that’s not coordinates with a patterned lampshade I found on clearance at Target. 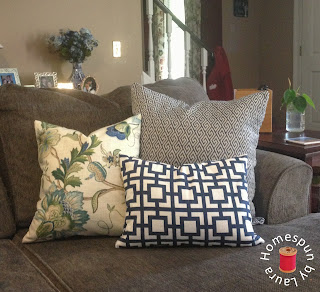 There’s a funny story behind this lampshade.  According to the timestamp on the photos I took of it in the store, I noticed this lamp for the first time in March of 2014 (I always take a photo of something that catches my eye in stores to pin to an idea board for future reference).  Then, in February of 2015, as I was beginning to redecorate the den, I was passing an end cap in Target, when all of a sudden something made me stop.  Out of the corner of my eye, I had spotted the lampshade on clearance!  The excitement of finding this $25 lampshade for only $8 almost a year later was awesome.

You might also be wondering about the lamp and the trinkets inside it.  I got the idea when Karen at Sew Many Ways made lamps like this for her daughters for Christmas gifts.  It took no time to fill the lamp base up with old kid’s meal toys and souvenir keychains, etc. that I collected over the years as a child and teenager and just couldn’t get rid of when I grew up.

The last completed project that’s a part of the den redesign was the sad little nightstand I turned into a media stand for our DVD player, cable box, and the Wii console.  It started out as a lonely, deserted, three-legged piece of roadside garbage that I came across at the end of a run in another neighborhood…a few months later, it had found a new purpose in our den.


The striped box underneath it holds Wii games and extra controllers AND it hides the mass of cords that, even though they are now better organized, still take up a ton of space floor space behind the box.  I may cover the box at some point with coordinating fabric; we’ll see.  The smaller footprint of the new media stand makes more room for the barstool that sits in the corner near it; once we brought our new couch in, we had to reconfigure the position of the bar and stools a bit to ease traffic through the room and prevent it from looking incredibly crowded on that side of the room:

Bringing in the new media stand allowed me to shuffle some other shelves around.  I replaced the cheap particle board cube shelf with the unfinished shelf we stained soon after moving in.  The particle board shelf will find a new home in a closet or guest bedroom in the near future…in the meantime, it’s hiding in the dining room.


My sister-in-law worked at the Market in Charleston while she was in grad school there several years ago, and she gave us this molded pineapple she bought at the Market from a local artisan as a gift during her time there.  I love that it matches perfectly with the bits of blue in the new curtains. 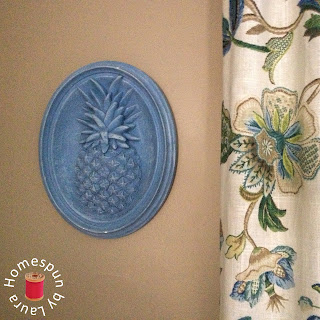 It took us a ridiculously long time to hang up any photos after we moved in, and at first the only photos in the whole room were these two collage frames on either side of the fireplace, which looked so lonely up there by themselves for the first few years. 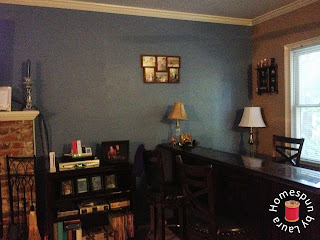 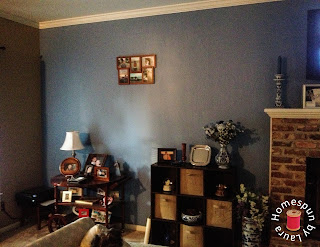 We added frames to each side to create two gallery walls a little over a year ago.  They display photos mostly from trips we’ve taken together over the years.  A few of the frames were bought new, but a lot of them came from thrift stores and got a few coats of brown spray paint before being filled with photos.  The poster prints are from Sam’s Club, where you can get a good quality large print for a reasonable price (if you don’t count the membership fee…). 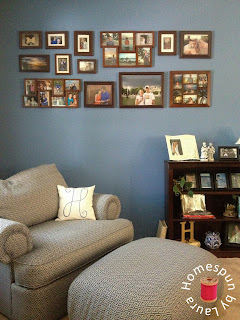 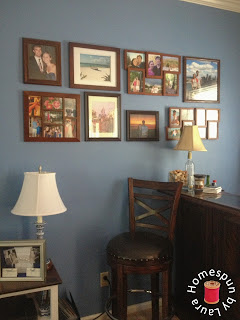 On the other side of the room, behind the couch, are a few more photographs on the walls (yes, I’m aware that the one on the far right is WAY too small, but I haven’t decided what to put in its place yet), a closet that needs to be organized a bit better, and a couple pieces of furniture.  The long shelf on the left side was a Craigslist find soon after we moved in.  It’s home to our giant DVD collection and vacation photos in souvenir frames from many cities that we’ve visited.

To finish it all off, I focused a little bit of time and attention to a few other areas that needed some polish:

I gave the mantle a fresh coat of paint and repainted the cords that trail down from the TV to hide behind the new media stand; so much more of them show now that the smaller piece of furniture is in front of them.  Now they’re all the same color as the wall.

The trim was awfully dirty and looked yellowish when compared with the newly-painted staircase and mantle, so I gave the visible areas a fresh coat to match (if we move the furniture around/when we move, it will be obvious that I was too lazy to move all the furniture and do a thorough job…).

The antique tea cart where the trinket lamp lives now was getting a little crowded with all the photos on it, so I tidied it up a bit.  The box underneath it holds lists of gifts that were given to us for our wedding, cards from our guests, and other wedding memories.

The missing piece here is the coffee table.  It’s a project that’s a little intimidating to me because it involves me making a table out of a window.  The window has been sitting in our garage for about two years, waiting for me to come up with a use for it.  I drew out a sketch for it a few months ago, and it’s been evolving over time.  Now that it’s summer, it’s getting too hot to paint or stain outside (for about 2 weeks straight, it’s been over 100 degrees!), or to spend any significant amount of time in the garage constructing a table, so the coffee table probably will not make its debut until early fall.  Am I reaching for reasons to put it off a little?  Maybe a little…but it will happen when the temperature and I are ready!


Thank you for following along with this project!  It’s been a lot of work but certainly worth the effort and the wait.  I’m slowly learning that sometimes it’s best not to dive head first into a project before you’ve had the opportunity to plan the whole thing, as I have been known to do.  There are a few bits and pieces that I haven’t gotten to yet, in addition to the coffee table, but I didn’t want to wait for them to do this reveal; they’ll be addressed when the time is right.  I may or may not cover the light fixture on the fan with a single lampshade like this one here, and I definitely need to replace or clean up and spray paint the dated brass light fixture in the entryway.  And we should replace the carpet one of these days; it’s quite worn down in high-traffic areas.

If you missed any of the previous posts about this redesign project, you can find them sprinkled throughout the post or by clicking here.

If you made it this far, congratulations for hanging in there!  If you just scrolled through and looked at the pictures before arriving here, thanks for taking a peek!

The next group of projects to be featured here will be some that the Mister and I did at my parents’ house for their Mother’s day and Father’s day gifts a few weeks ago.  Stay tuned!