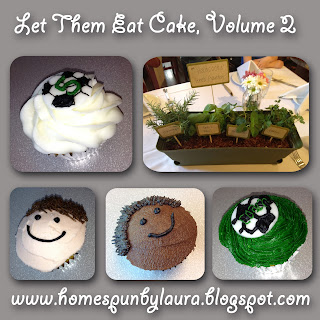 Well, it appears that I’ve been AWOL for a little while. It’s been busy.  Here are a few cute cakes that have come out of my kitchen since the original Let Them Eat Cake post.

The first of my recent cakes is the one I did for my cousin’s fiancée’s spice-themed bridal shower. Each guest brought a spice/herb/seasoning that began with the first letter of her first name. Some people got really creative with their gifts, and it was a fun shower. Really cute theme, I thought. The cake I came up with was an actual spice cake (it just made sense) with browned butter icing, topped with colored coconut to look like ground cover, with sprigs of herbs to look like a window box herb garden:

More recently, there were the cupcakes for an area high school soccer team’s senior night. Someone I work with has a son on the team and she asked if I’d be interested in making some cupcakes for the team, so I said “OF COURSE!” It was a fun order to work on – there were several different designs for the cupcakes. Each senior got a cupcake of his face: 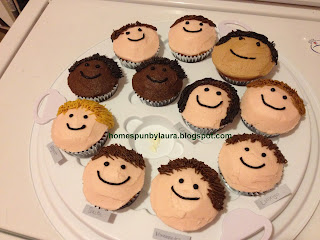 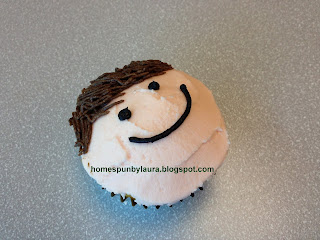 The other players each got a cupcake with their number, which I piped on top of little fondant soccer balls, because it gave them something extra: 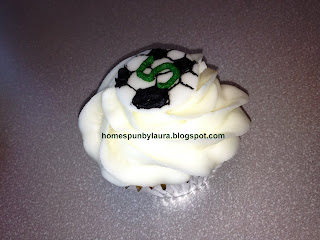 The coaches got a cupcake with ‘coach’ piped on the little fondant soccer balls: 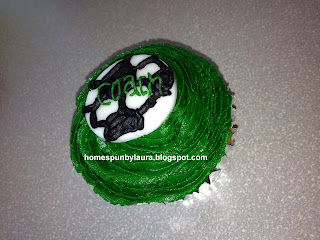 With the few leftover cupcakes, I decided to make some fun Cinco de Mayo cake pops for the party we’re heading to right now as I type. I settled on little sombreros. They were fun to make and I even recruited my handyman husband to dip them in the sprinkles at the end. I realized as soon as we finished that it would have been easier/cuter to make them cake balls instead of pops, and they’d just rest on their little sombrero on a cute plate or something instead of on a stick. And would have been easier to transport.
But it doesn’t really matter how they’re presented when they melt in your car! On the way to the party, we stopped by my husband’s grandparents to catch up for about a half an hour. Guess who forgot to take the pops out of the car when we go to the grandparents’…!   Even after I had taken such care to take them out while we were at another event earlier in the day. So they were torn/melted to pieces when we arrived at our Cinco de Mayo party. Oh well, they tasted good anyway!!
Until next time…

The days are short but the years are long. Isn’t

The iPhone really is pretty amazing. I took some p

I’m going off of disrupted sleep for the past 11

Week 3 of the @oneroomchallenge came and went with

Three years ago while we were expecting our first

It’s time for the spring #oneroomchallenge! This

The setting sun streaming through this window stop

For the first time in six weeks, I left the baby a