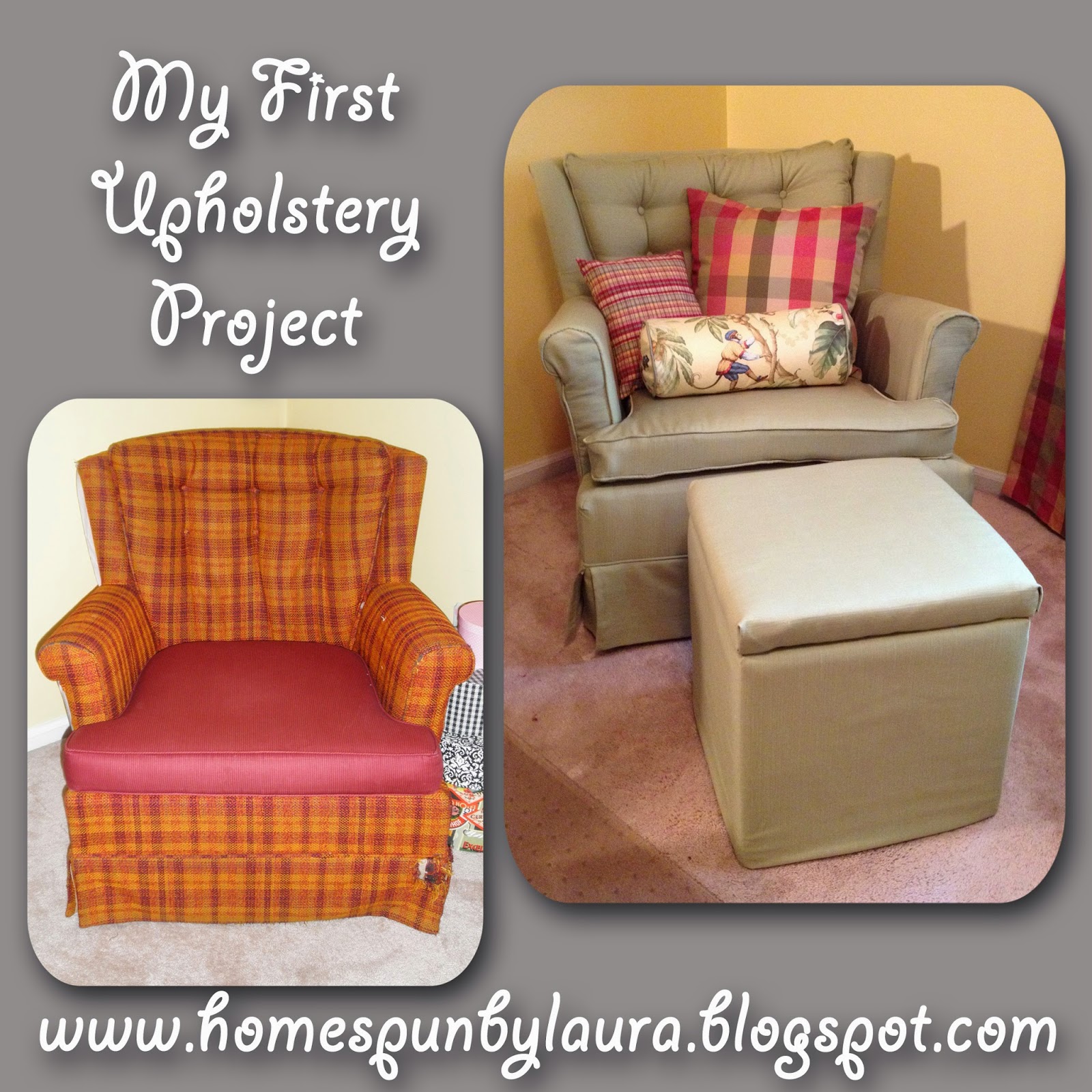 In my first post on this blog, I introduced you to my re-upholstery project, the Ugly Chair.  Having no experience with upholstery, and therefore no idea what I was getting myself into, I armed myself with this tutorial that I read before I began to get an idea of what I was doing, and got to work.

Day 1
After running up and down the stairs five or six times from my Yellow Room to the garage and back to gather all the tools I would need, I decided that my goal for Day 1 was just to get out as many of the staples as possible.  Not a very clear goal, but easily attainable.  I got out as many as I could and called it a day.

Days 2-3
I continued pulling out staples, being careful to keep the pieces of fabric intact so I could use them as a pattern when it was time to re-build.  Seven hours, thousands (ok, maybe only hundreds, but that’s a lot!) of staples, a single scraped knuckle, and a huge pile of discarded old materials later, the chair is down to its bones.

Now it’s time to pull out the new batting, foam, and fabric, and get back to work!

Days 4-22
This was a longer process than I had anticipated…it took almost 3 weeks of working 2-3 hours per day 3-4 days during the week and 4-5 hours per day on the weekends to cut and sew the pieces that would be used to cover the chair when it was time.

Day 23
I randomly had the day off of work. And it was quite a productive day!  I got in a five mile run this morning- the longest run I’ve done since November of 2010- ran some errands, walked the dog, and pretty much worked on the chair for the rest of the day.  Making the back cushion has been the most challenging part by far, but that doesn’t mean the rest hasn’t been a challenge!!  I saved that piece and the seat cushion for last – they just seemed like projects that I should try to do all in one sitting if at all possible.  I was right.  I decided to go ahead and begin re-assembly once I had completed the back cushion. I decided to wait on the seat cushion because I was just so excited to see pretty green fabric on my chair instead of the wood skeleton. So I got to work, and almost 1,000 staples later and 3 days later, my wrist/thumb joint are killing me (I already have pain issues with this area on a regular basis and using a staple gun over and over for several days hasn’t helped the problem), but the chair is ALMOST FINISHED!  I hoped that I would finish the entire project today, but I realized going into it that it was very unlikely.

Days 24-28
Notice in the photo above that the back cushion is slightly crooked…and there are a few other imperfections that of course, stand out like sore thumbs to me.  Though it looks almost complete, it’s not quite there.  The outsides and back are not covered yet, plus there’s the seat cushion and the little skirt that goes at the bottom, which was one of the most fun parts of the project to work on.  That, and the back cushion, even though it was very challenging.  Over these last 4 days, I straightened the back cushion as much as it could possibly be straightened without undoing a lot of hard work (re-making the whole thing), got the sides covered, got the back covered, and stapled the little skirt on.  Sounds like it wouldn’t take long, but it actually did!

Then, it was time to tackle the seat cushion cover.  This wound up being the most time-consuming part because I had never made a cushion like this one – I’ve pretty much just stuck with plain old straightforward pillows and had to teach myself how to add in the gusset.  Initially, it didn’t seem like it would be too bad because I had the original cover to use as a pattern, but my seam allowances wound up closer to .5″ than .25″ by the time I got the piping attached and the gusset added.  The part that was super challenging is the front corners of the cushion where you have to turn two corners back-to-back, only separated by a few inches.  This is what got me off track.  So instead of re-making the cover, I trimmed down the cushion.  Bad move.  The cushion is now a little small for the chair, but one of these days, I’ll fix that.  I saved all the original pieces to make my life easier when the time comes, but I just can’t make myself do it right now!  Plus, the pillows I keep on the chair hide it pretty well for the time being.

I didn’t take very many pictures of the re-assembly process because I was so focused on getting everything done.  And re-assembly actually happened very quickly compared to preparing for re-assembly, so taking detailed photos sort of slipped by me.

Now that the chair is complete (!!!!), I can say that I learned a lot about how a chair is put together, and I’d like to offer this guide to anyone who ever considers taking apart a chair without any prior knowledge:

1)  Take DETAILED notes and lots of photos as you peel off the original pieces of the furniture.  I did both of these, but when I went back to read them as I created the new pieces and re-assembled the chair, I found myself wondering what I meant on some of the notes and exactly what a few of the pictures were of.  So, as you take photos, write down in your notes the file names of the photos for each step next to the note they depict.  It will make your life easier as you put the pieces back together.

2) Be VERY CAREFUL with the pieces as you take them off of the furniture.  As long as you have the original pieces (and especially if you mark the seam allowances off with chalk on the wrong sides of the fabric for pieces that require sewing), the pieces of the puzzle will come together well.

3) Label pieces as you take them off of the chair.  I did this, and it helped out tremendously.

4) Make sure you have the necessary supplies:

5)  Be patient and don’t take the lazy/easy way out on any steps.  Yes, I should have learned this as a small child…and I did, for the most part.  But when it came to upholstery, I apparently forgot.  You’ll find out that this comes back to bite you as you re-assemble and makes the re-assembly process take much longer than it should.

I hope you enjoyed reading about this project as much as I enjoyed doing it (most of the time!).  I won’t be offended if you didn’t read the whole thing – I tend to get a little long-winded sometimes! 🙂