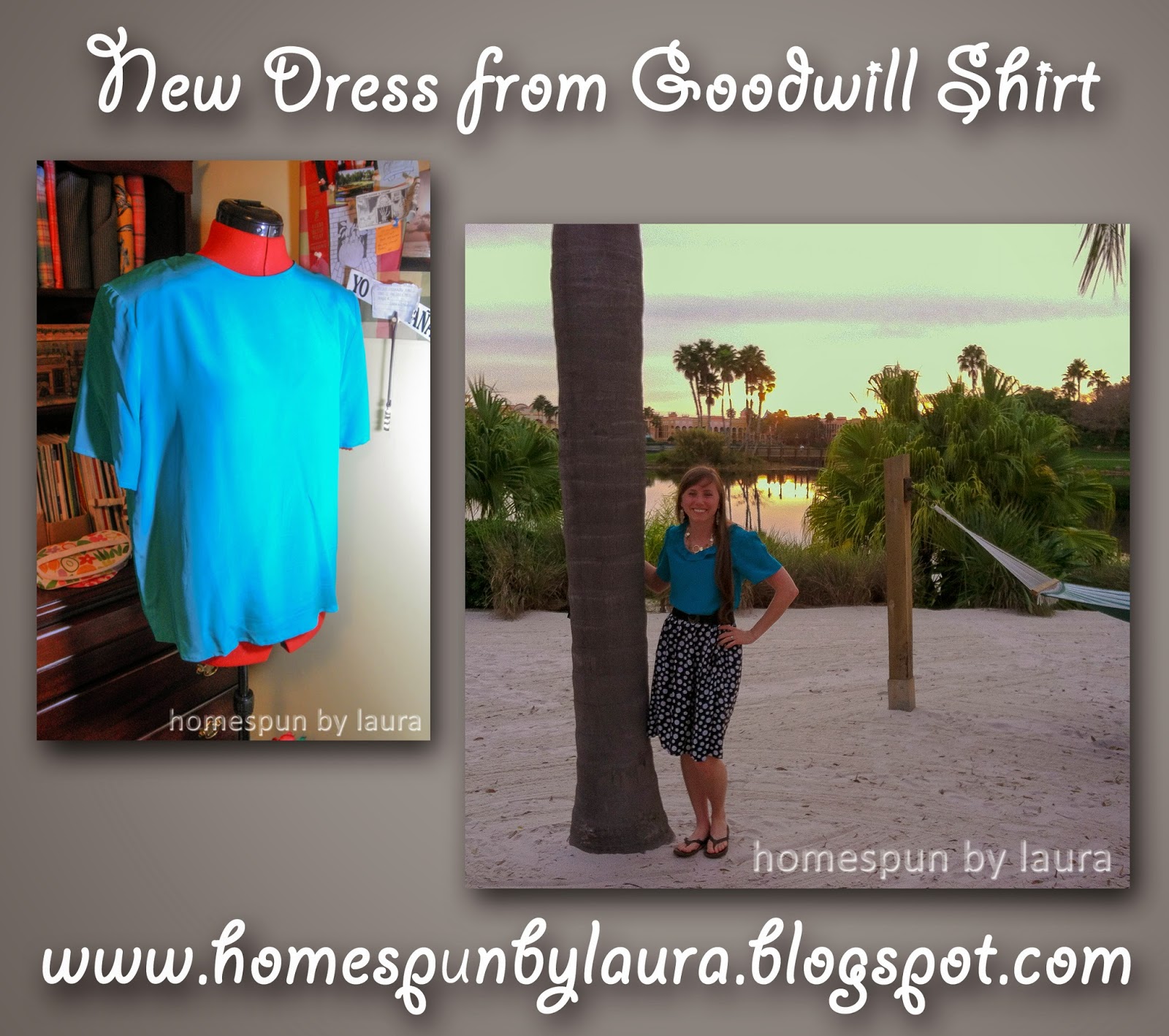 So…it appears that I’m on a sewing streak.  Throughout the existence of this blog, I’ve tried to avoid posting too many projects from the same category in a row, but it appears that I failed in that attempt here.  Bear with me on this one; I’ll change gears for the next post!
This project is – you guessed it – another project that was completed WAY before today.  In fact, I finished it over a year and a half ago, before I ran my marathon and wore the alien costume.  The memories from that day stand out in my mind (I mean, how could you forget running over 26 miles through the most magical place on earth?!) like they were yesterday…so for now, I’ll pretend that this dress was also completed yesterday.  🙂

I trained for the marathon with Team in Training, and later that evening, there was a big celebration for the Team in Training participants and their guests.  I wanted a fun new dress to wear to said celebration, and this kind of plain but pretty turquoise silk shirt with some major shoulder pad problems seemed just right…but it needed some help first.

I got started by removing these guys:

After the shoulder pads were history, I carefully picked the sleeves off the shirt, making sure to keep them in as close to perfect condition as possible so that I could add them back on later.

Next, I started the process of taking the shirt in by turning it inside out on my dress form and pining it in a bit on the sides. 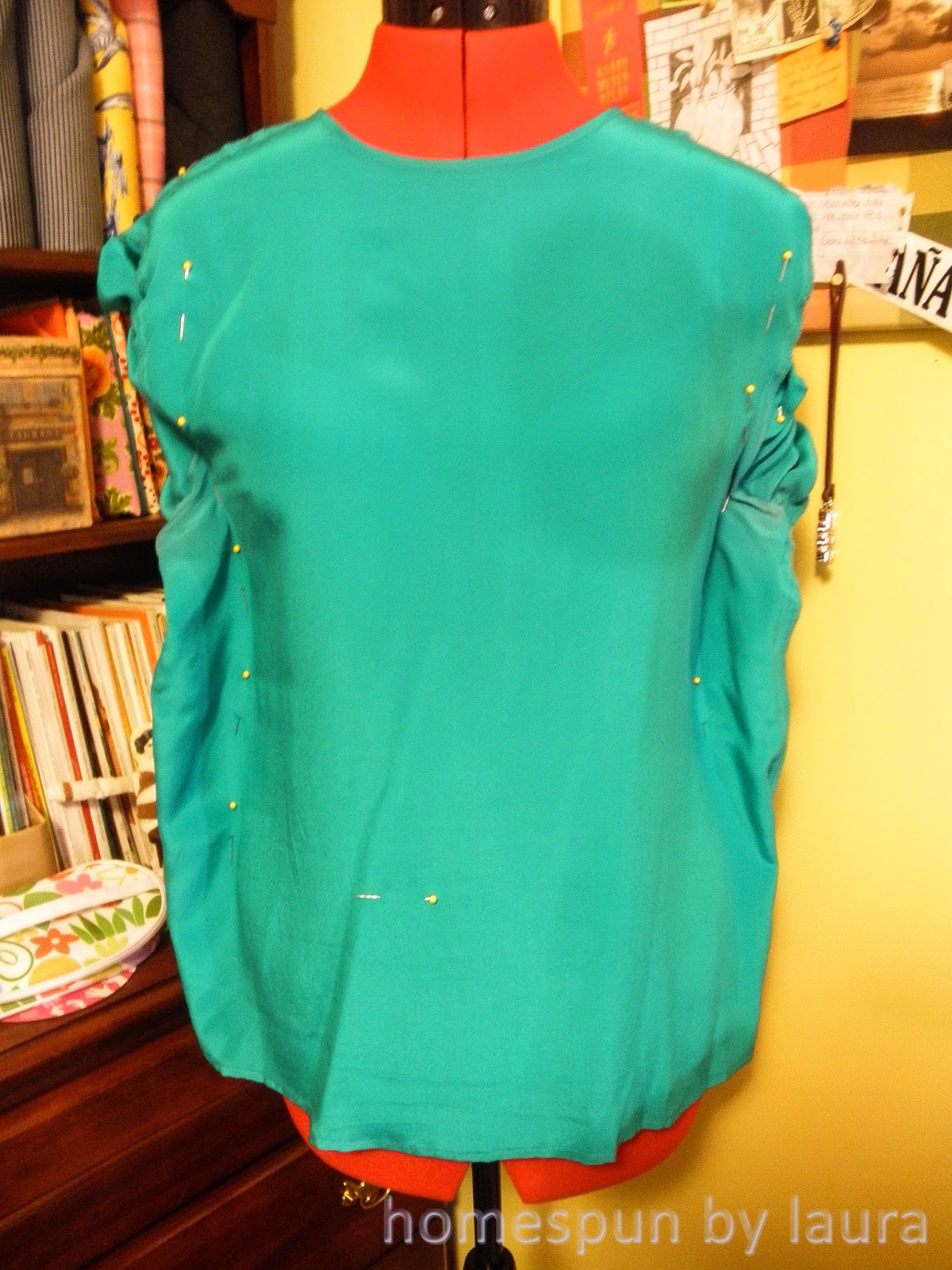 I then trimmed down the sides and armholes, leaving about 1/2″ for the seam allowance, and stitched up the sides.  I also put a pin horizontally to mark the approximate level of the waistline of my new dress (it’s more visible in the photo above this paragraph than below) and trimmed off the extra fabric at the bottom, leaving about 3 inches below the pin.

Rocky sat peacefully in his bed and observed while I stitched the sides up.
The next step was to take the sleeves in a bit, which I did by gathering the top of them and attaching them to the new, smaller armholes, making them a tiny bit puffy on top.  I didn’t take great pictures of that step, as you can see below.

I began lowering the neck next, starting with a chalk line marked where the neck would soon be…but I wanted to add a little ruffle first.


I trimmed down the front of the dress along the neckline and made the ruffle by reusing the scrap I cut from the bottom of the shirt earlier.

I pinned the ruffle (right side) to the shirt (wrong side), and stitched them together.  Once the ruffle was attached, I folded it over, pressed it down, and top-stitched it to keep it from flipping inside.

I moved on to the skirt next.  I had bought a couple of yards of silky black and white fabric a few months before I began this project with no particular plan for it.  It seemed perfect for this project, so I decided to pull it out and make the skirt of my dress out of it.
Once cut, I folded it in half widthwise and stitched it together, forming the back seam. 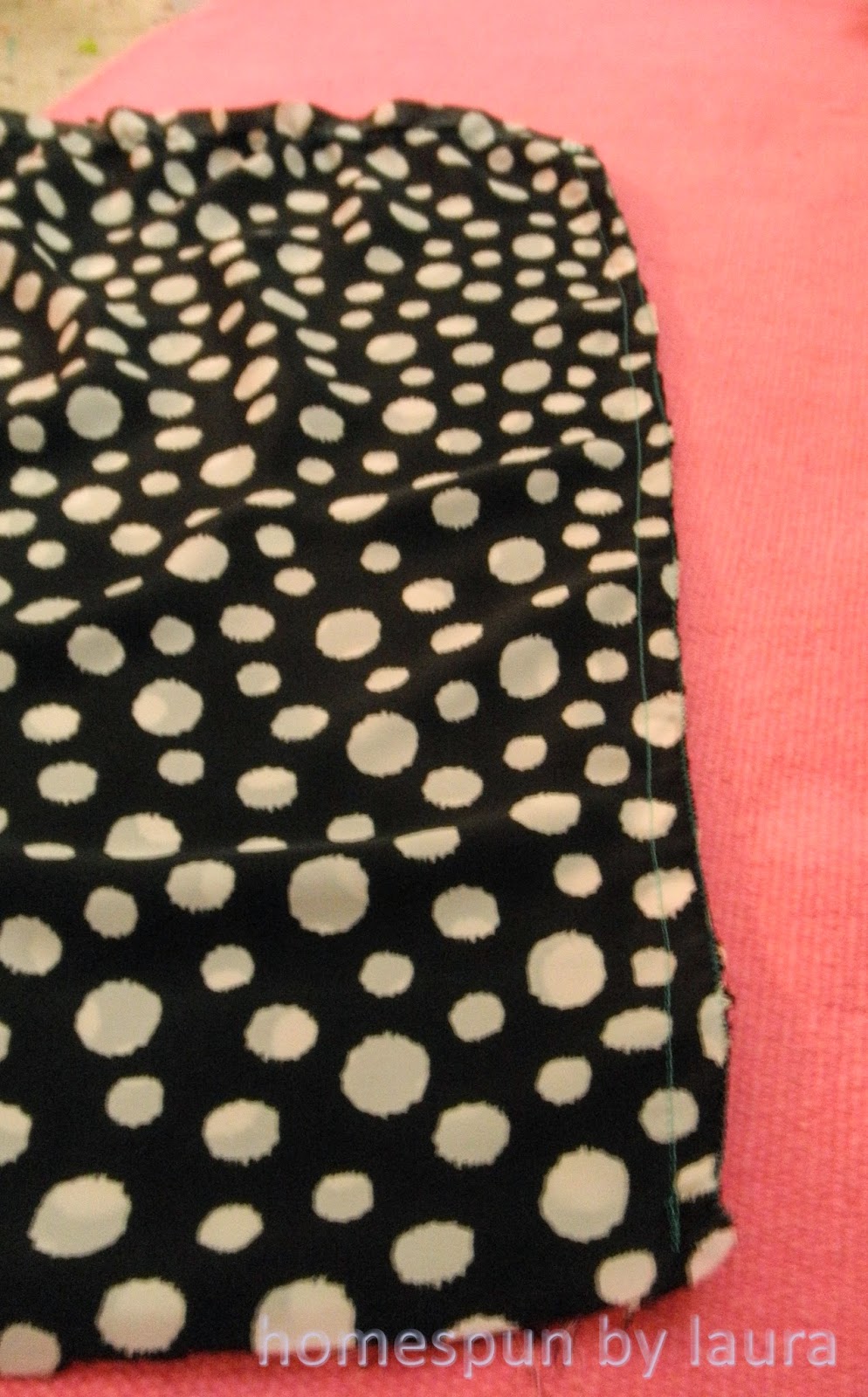 For the bottom hem, I first used a zigzag stitch to overcast the raw edge.  I then folded it over 1/2″ and stitched to finish the hem. 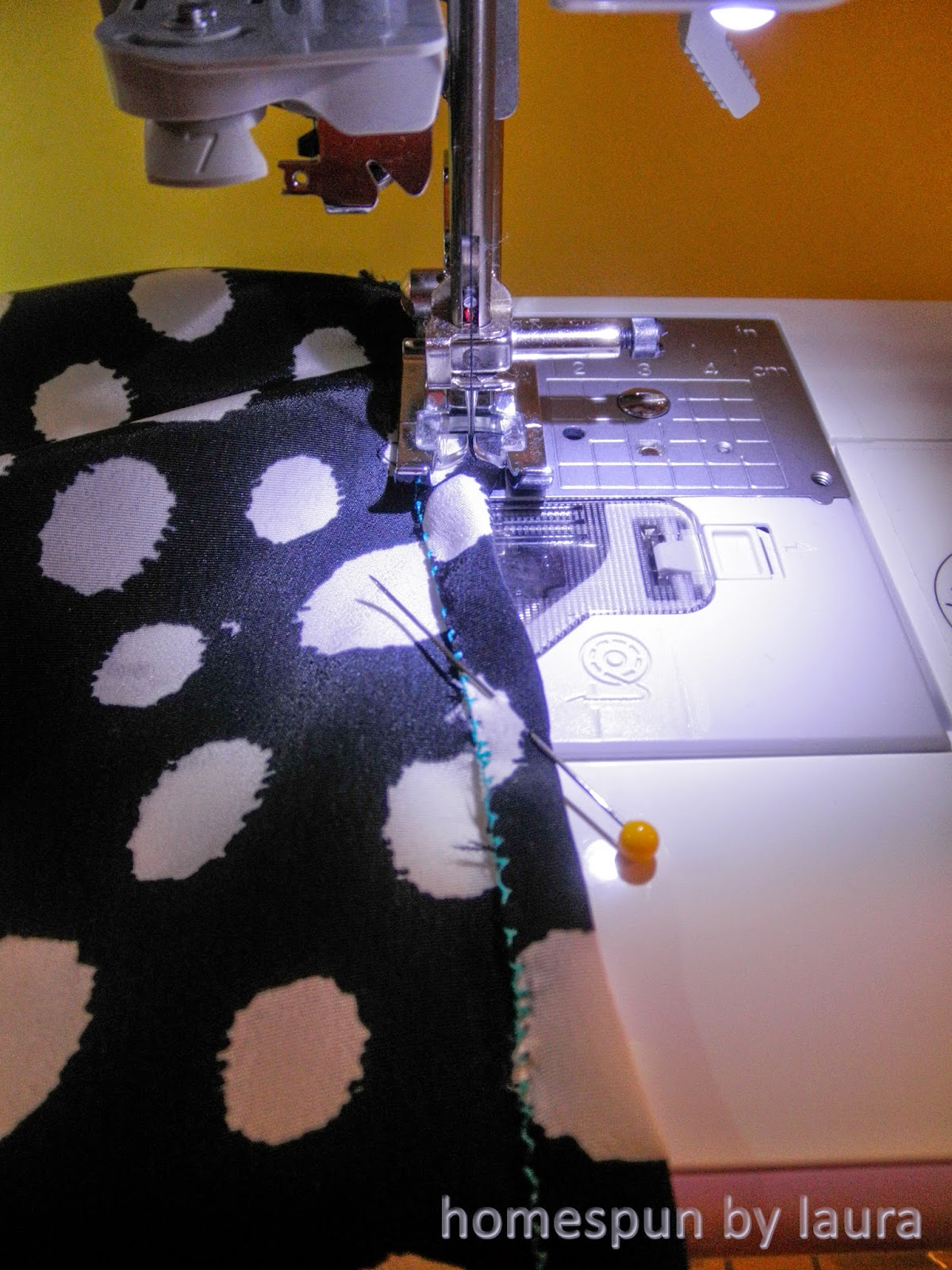 Next, I attached the shirt to the skirt.  I didn’t take a picture of this process…but basically, with the shirt RIGHT side out, I slid it into the opening of the skirt, which was WRONG side out, and lined up the edges.  I stitched all the way around two times to make sure it was secure, turned it right side out, and it was finished!!

I paired the dress with a belt to define the waist (which was kind of a necessity since it wasn’t fitted) and a pair of flip flops – I had packed a pair of heels, but there was NO WAY I was going to make it anywhere in heels that night!  I was so tired by the end of that day (I had to wake up at 3:30am in order to be at the starting line by 5:00am), but I got to put on my new dress for a few hours before I crashed and slept for the next 10 hours.

Here’s a breakdown of the project:
Thanks for checking in!
Laura