December 1, 2014August 23, 2017
About a year and a half ago, I decided that the layout in the dining area of our kitchen wasn’t working.  I’d always wanted a desk in the kitchen to keep papers from piling up on the table, so we moved our desk into it about two years after we moved in…but it took up too much space and didn’t really wind up serving its purpose well enough to justify the amount of space it took up.  About a year ago, after pondering for months to figure out what the right solution was, it finally hit me.
A new (to me!) hutch would be perfect to provide a little bit of additional storage and an area to display the serving pieces of our everyday china that I love…but that we rarely use since it’s just the two of us.  And it would take up less space so the dining area wouldn’t look so cluttered: 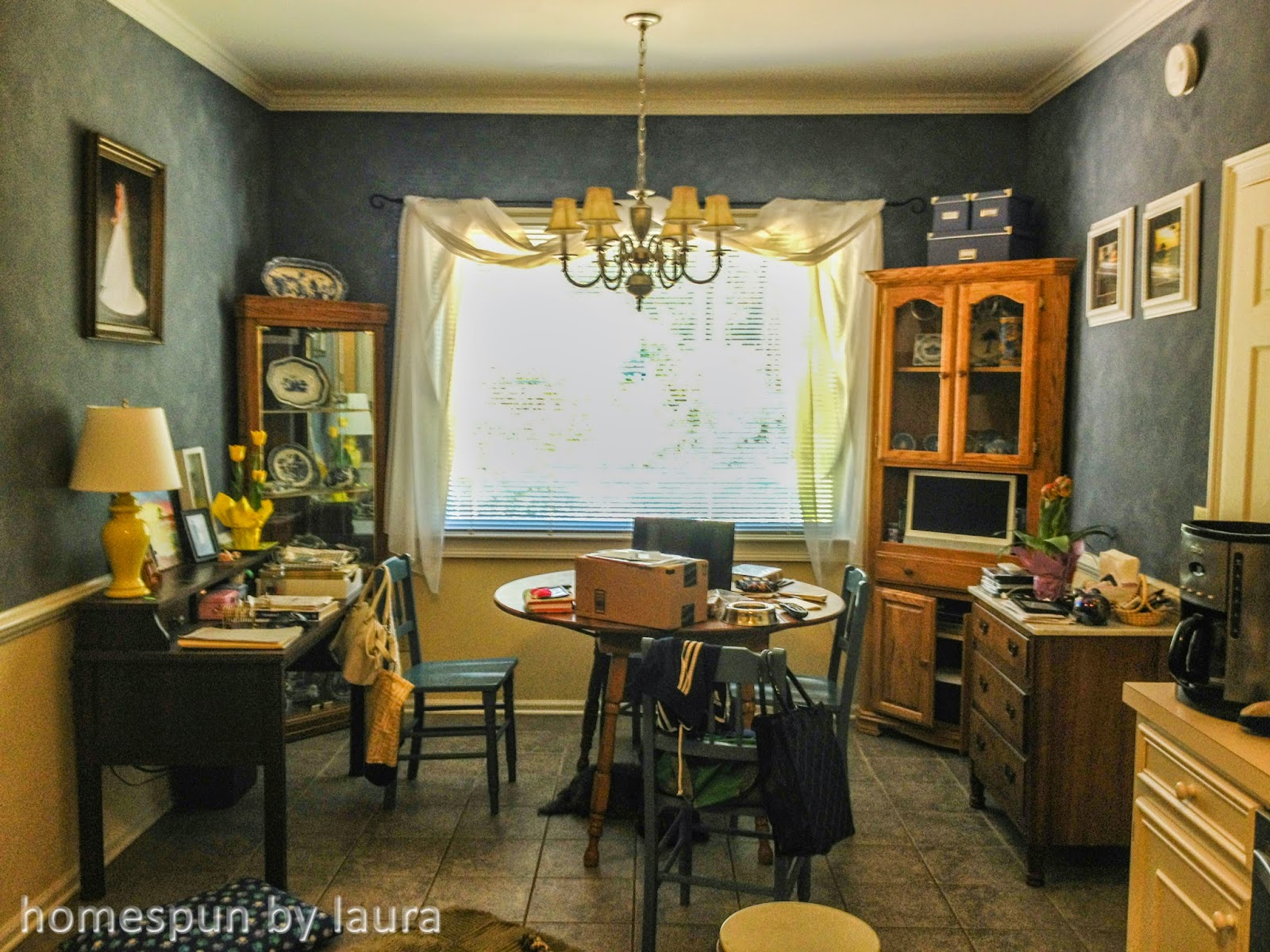 There was stuff accumulating everywhere, even with the desk!

So last fall, I began my months-long search for the right hutch.  I found a few at thrift stores, but they were either too expensive or didn’t fit my requirements, which were:

When I found this hutch on Craigslist in March, I just about jumped for joy. It happened to be for sale at a thrift store that I’d never been to (or even heard of!) near my dentist office (which is not at all close to our house), and I happened to have a dentist appointment that morning…so the Mister met me there on the way to my appointment and we took a quick look.  It seemed to fit all of my requirements,  so we went for it.
They were asking $150, but we managed to get them down to $100. After going through the process of cleaning the thing up, though, I wished I’d fought to get it for less.  It was pretty gross, but more about that later. We went back to pick it up a couple of days later and managed to load it into and unload it out of the back of my truck by ourselves without breaking anything (it or us!).

I began the process of cleaning the hutch up by first removing all the hardware and taking the cabinets off, which took about an hour.  Since I needed to re-use the hinges and the screws that went with them (there were FOUR different types of screws in this beast!), I cleaned them up (using this method) to prep them for being painted.  And for some reason, I went ahead and cleaned up ALL of the hardware – drawer pulls and all – even though I had no intention of reusing them, which took about 2 hours.  It probably would have only taken half an hour if I had thought through the process a little better and only cleaned the 10 pieces I needed.  Oops.


I probably should have hand-dried them instead of leaving them to air-dry…
I wasn’t sure what to do at this point to get all the rust off, so I picked up a piece of sandpaper that was sitting nearby and started sanding down one of the pieces…and it worked!  It left some scratches, but I figured that the paint would cover them up well enough (It did!) that I would probably be the only person who’d notice them (I don’t!).

So I set up a beach chair in the garage and watched part of an NCIS rerun while I sanded down the rusted hardware (only what I needed this time!).

Next, I had to clean the surface of the hutch to get it ready to be sanded.  It had years’ worth of gunk built up on its surface, a few bug larva (larvae? larvi?), and even the text of a Nutrition Facts panel from some food carton stuck to it, and it took ages to clean (about 8 hours!).  I started with the Shop Vac, then pulled out some Pledge, and a few rags – and when those weren’t enough, a paint scraper – some of the gunk that had accumulated over the years really didn’t want to come off. 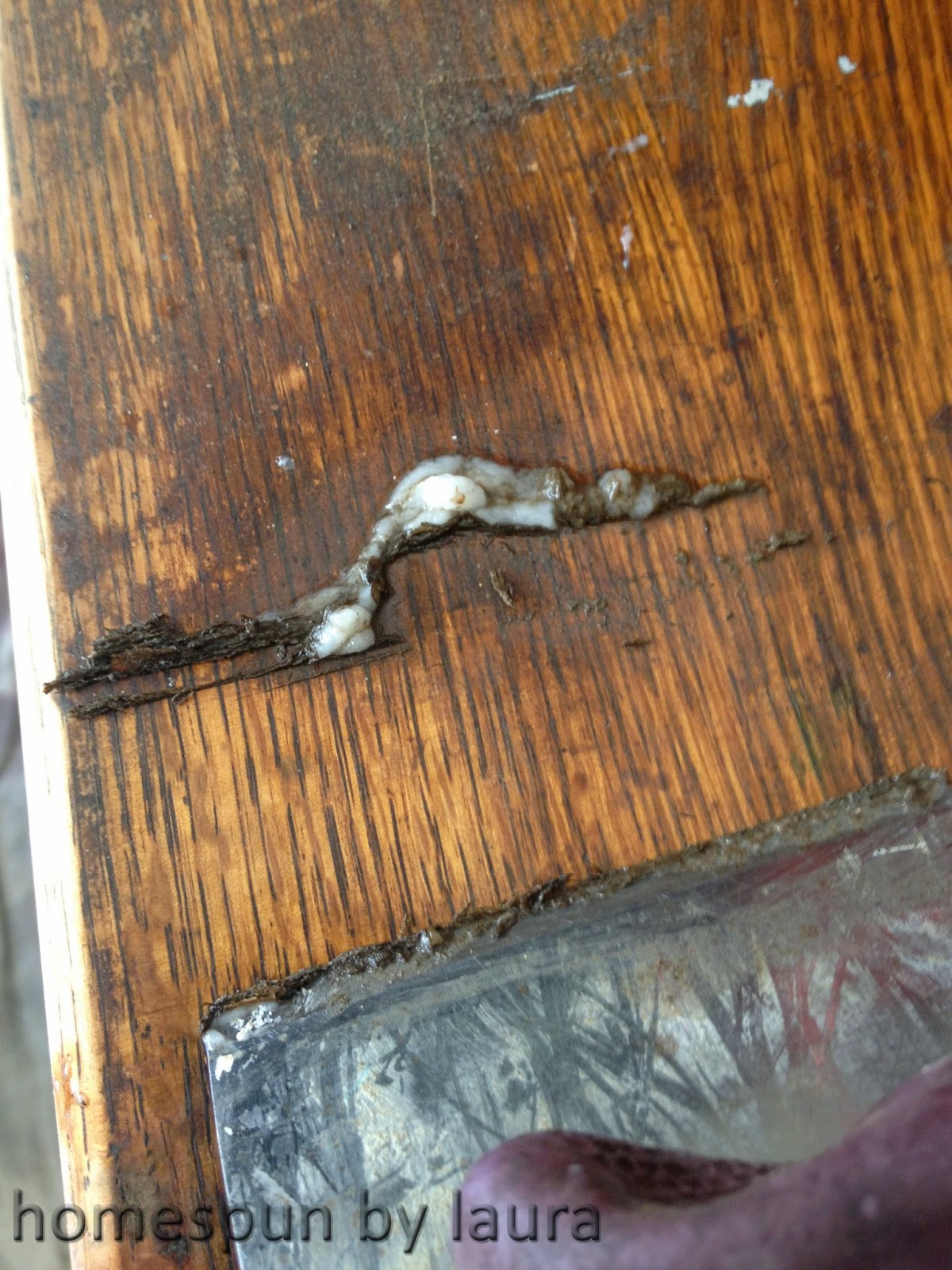 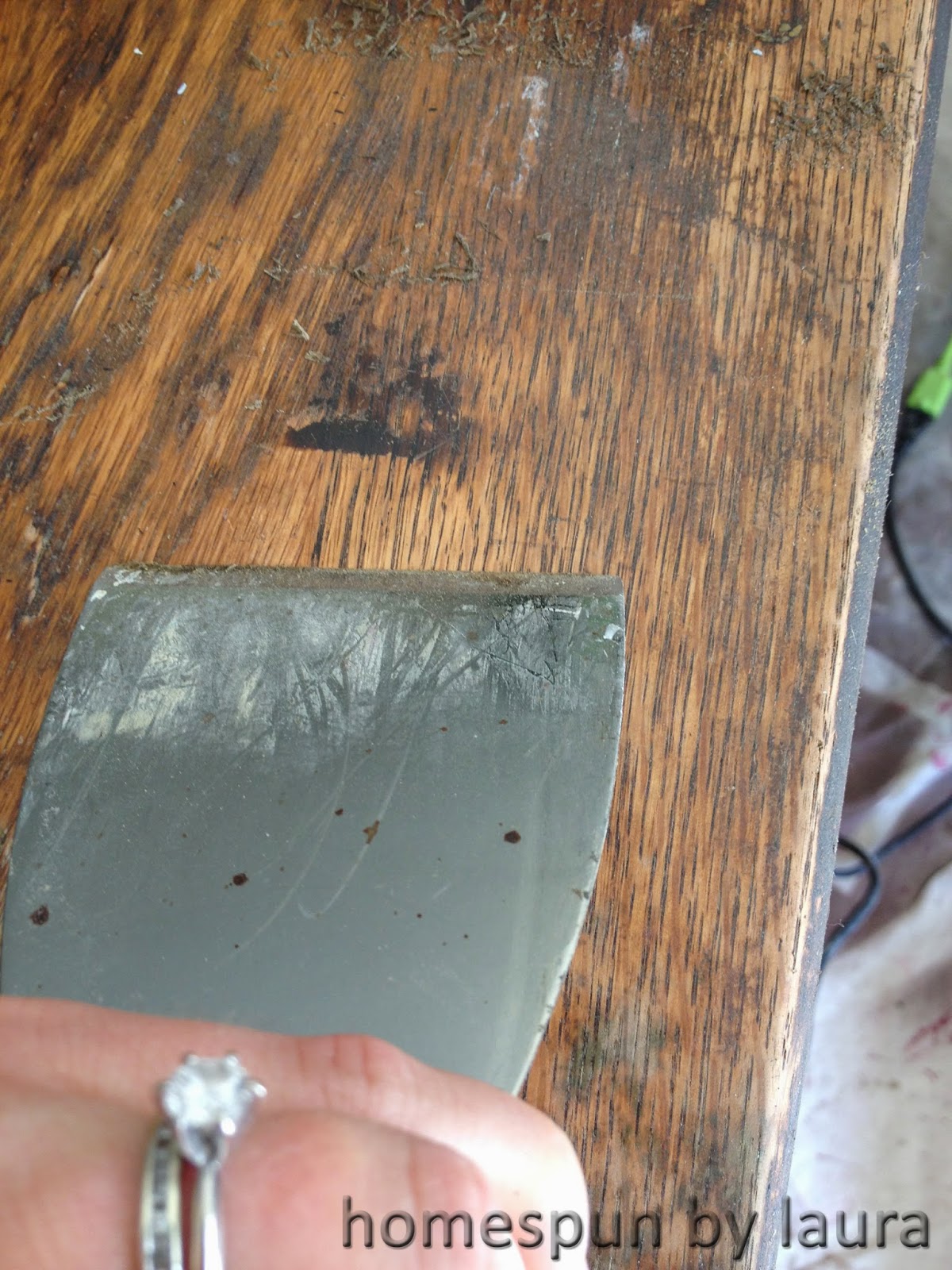 Paint scraper to the rescue!
It still wasn’t ready for paint yet, though!  I pulled out the electric sander, goggles, and a mask next and created a major dust storm in the garage.  Seriously – my truck was covered with sand dust when I got finished!
After I wiped the entire piece down with a wet rag to clean the sand dust off, I pulled out my favorite stain and got a few coats on the counter top part.
Among the last things I had to do before pulling out the paint was to fix the broken slat on the side of the hutch – another problem I didn’t notice until we got the thing home.  The Mister helped me out with the screws and mending plates one morning before work, which left it ready for me to even out the edge with some wood putty.
While I had the wood putty out, I also filled the holes in the drawers so I could use knobs that match the rest of our kitchen instead of the pulls that came with the hutch.  Once the putty was dry and sanded down, I found the center of each drawer and drilled a new hole for the new knobs.

The last thing I did before painting was to put a couple of coats of Polycrylic over the stain.  Once it had dried, I taped it off with a scrap of a plastic dropcloth to keep the paint off of it.  I wish I had done the polyurethane step later, though.  After I finished painting and removed the dropcloth, there were a few little places where the dropcloth had stuck to the surface and created an uneven surface, so I had to spot sand, spot re-stain, and spot re-poly them.  It only took about an hour, but it’s so frustrating to go back and spend that extra hour on a project after you thought you were finished!
I thought the rest of the project would be easy once I got to the paint…but I was wrong.  This thing was a monster and I started thinking I would never finish painting it, and if I did, that it would be the worst paint job ever – uneven with all kinds of brushstrokes covering it.  It had all sorts of nooks and crannies that were impossible to get into with a paint brush.  And I was only on the primer at that point!

So I finally surrendered and bought a paint sprayer.
After I got the hang of it, things went pretty quickly.  It’s a major pain to clean, so I would never pull it out for a small job, but this was NOT a small job.  There are a few places on the hutch that, if you look closely, you can see where the paint came out WAY too thick and ran a bit, but we’ll say that adds to the charm of the thing…
I first gave it a coat of primer and followed with two coats of white paint that matches our doors and trim.
After letting it dry overnight, we moved it into the kitchen.  And it looks AMAZING!  I still stare at it every time I walk into the kitchen.  It’s a perfect place to display our Blue Willow china and a painting I did of the Folly Beach Pier… 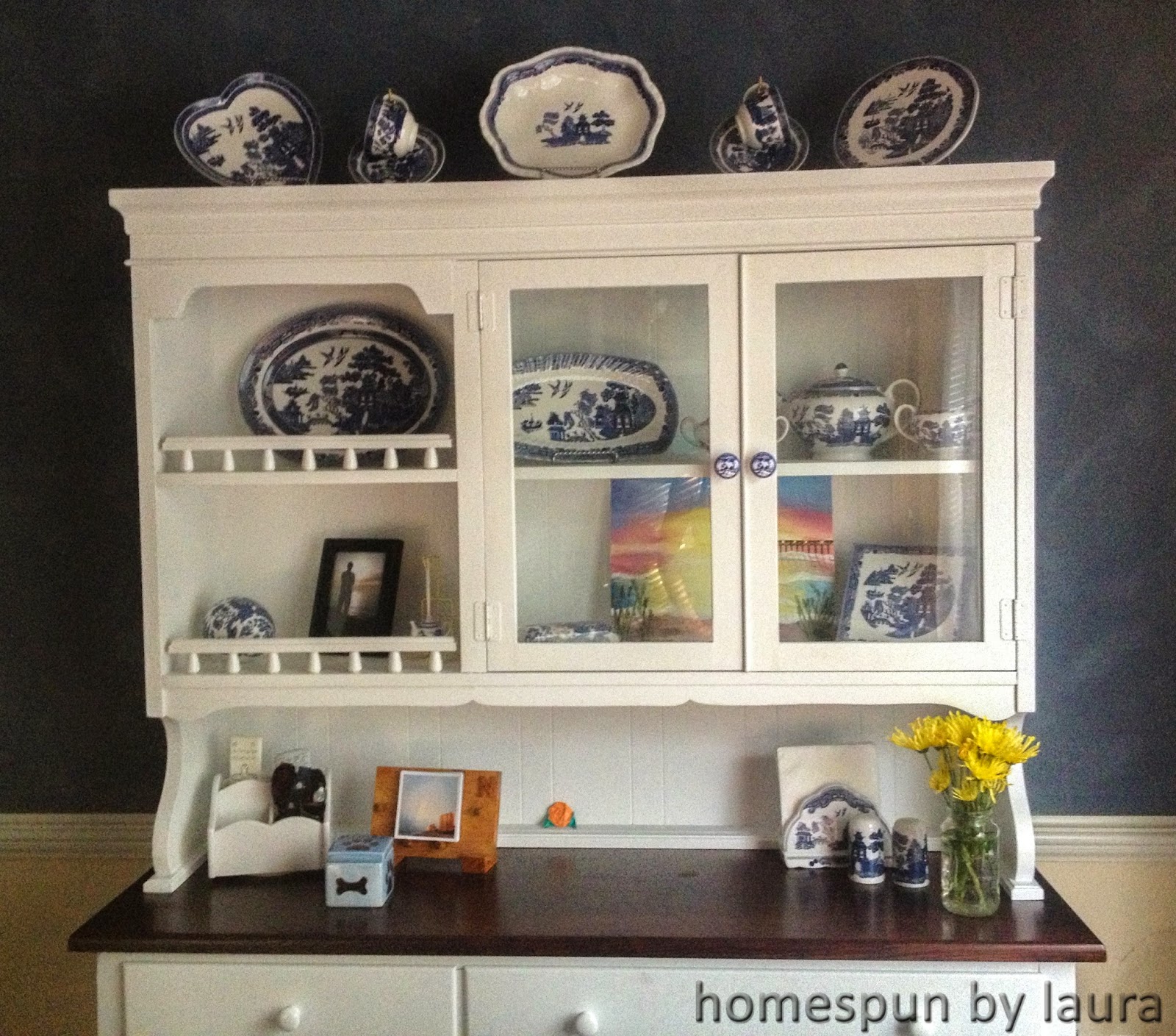 …a functional place to keep napkins, salt, and pepper – and pretty flowers… 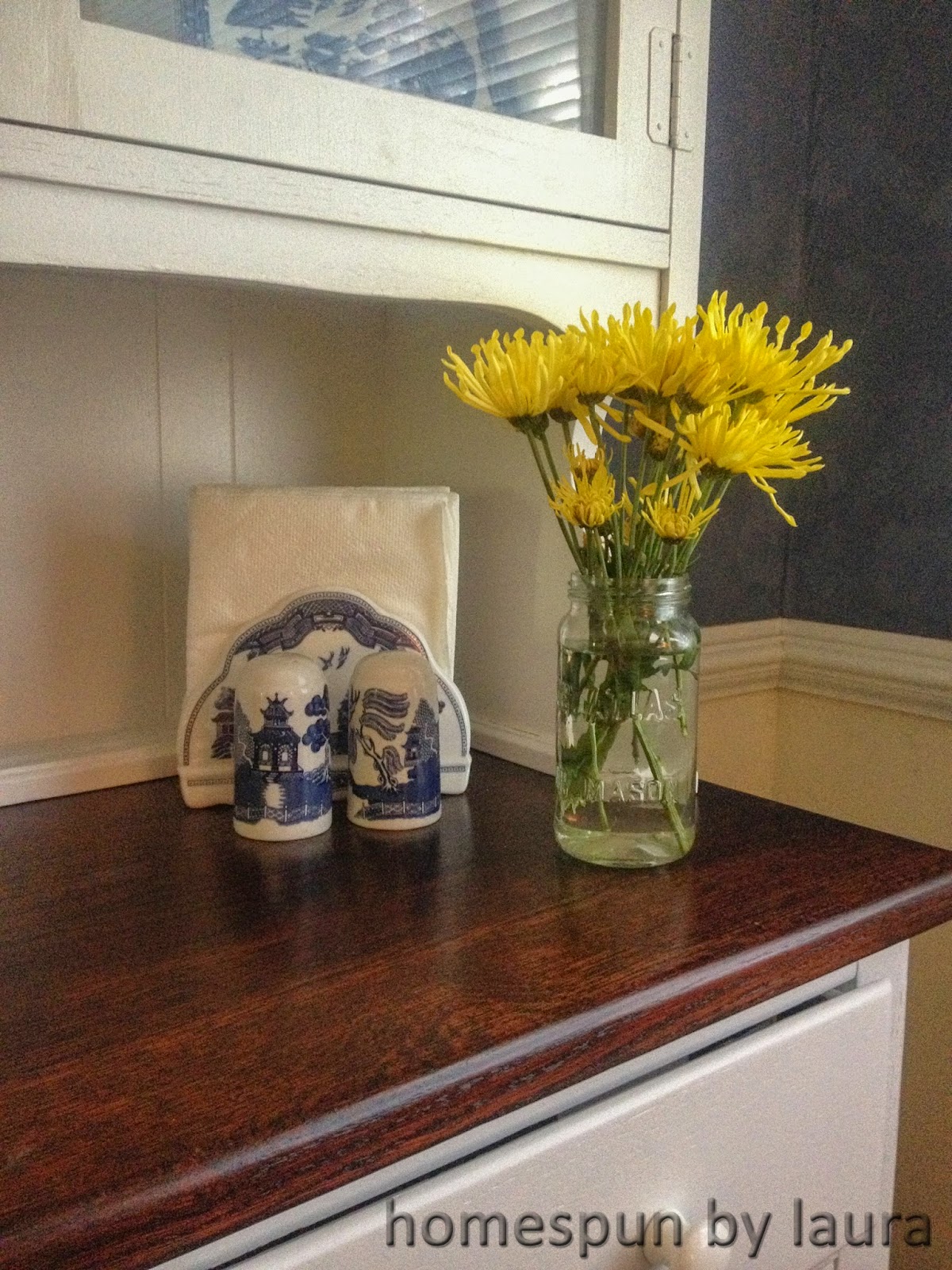 …and a place to corral all 3 remotes required for the kitchen TV, plus my sunglasses, which always wind up scattered where they don’t belong!


The drawers and cabinets finally provide me the storage I needed since the kitchen doubles as our home office area.

From start to finish (or truck to kitchen), this project took 3.5 weeks.  It was a relief to finally be able to park both cars in the garage again when I finished this one.  I stopped recording the actual working hours after about a week, so I’m estimating the total time.  I worked on it probably 10 of those 24 days.  On some days, I worked for only a few hours; other days, I spent the whole day on it.  I’ll guess that it took about 50 hours of work.  It was a learning process, too, and when I move on to painting the corner hutch that remains in the dining area to match, things will go much more smoothly as a result.
Time: ~50 hours over a period of 3 weeks
Total Cost:  ~$120  (hutch – $100; primer, paint, stain, poly, & wood putty – free from previous projects; new knobs and mending plates – ~$20 total)
And that ends the recap of this project!  Thanks for reading! 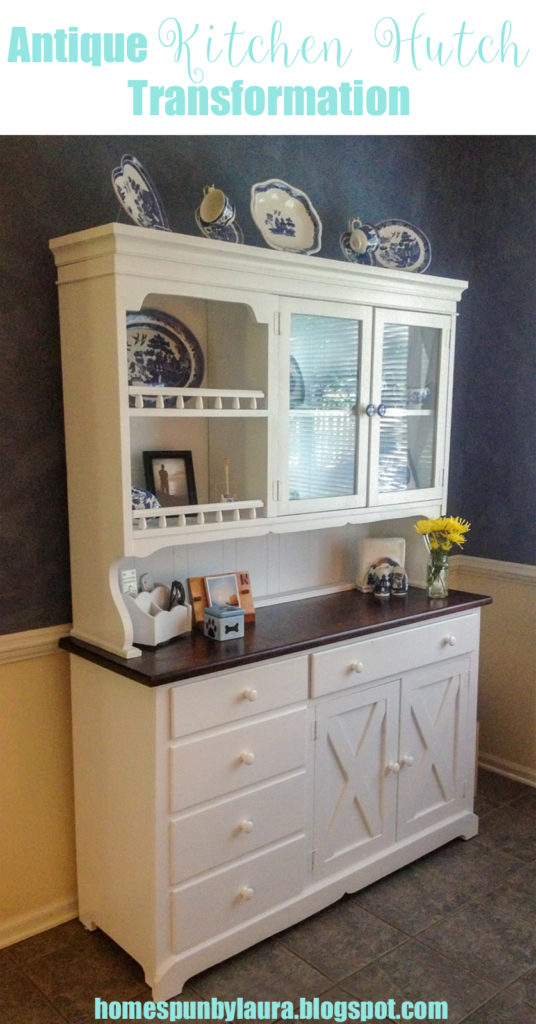