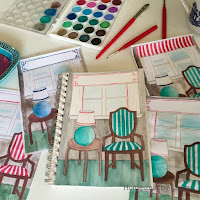 Hi there, blog people.  It’s been awhile, and it’s time to catch up a bit.

For the last six weeks, we have been busy preparing for a cross-country backroads road trip!  That’s right – we’re driving across and through the entire country – all 48 continental states – without using the interstate!

To prepare, the house had to get cleaned, a plan for dogs and house care had to be worked out, and…well, the list was a mile long, but now that we are a week in to the trip, the stress of keeping up with that list has totally melted away, and the majority of the items on the list have now escaped me.  So now I’m blogging from the road – US 281 from Austin to San Antonio through the hill country of Texas, and it’s absolutely beautiful.  A great temporary office!

The focus of this week’s Doodles was to select and order the fabric for the office redesign, which still has a few lingering projects to be checked off the list. I’m not really sure how to count this one.  It’s more than one Doodle, but it doesn’t seem like all 7 finished pieces should count…so we’ll call it 4:  (1) Practice lamp and chair sketches, (2) The original sketch, (3) ALL the ‘draft’ paintings on computer paper, and (4) the final watercolor on real watercolor paper.  That brings me to a total of 52 Doodles for the year…a bit behind! 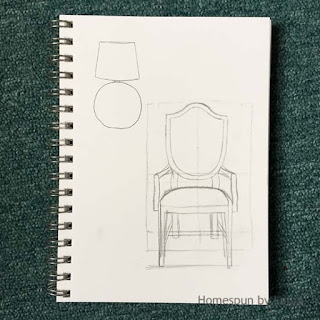 For this Doodle, I sketched out a made-up scene from our new office space to test out some different fabric combinations for the windows, sewing chair, and big sphere lamp.  In reality, all these pieces will be scattered around the room in various places, but in this Doodle, they are all tucked into one space so we can see how they look together.  The Mister has to actually SEE something to be able to ‘see’ it, literally painting him a picture was the best way to get his opinion on how to decorate the space.
I already had an idea of what I wanted to do, but couldn’t decide between a few different options, so those were the different combinations I painted for him after I made the final sketch.

So I wouldn’t have to draw the same scene over and over and over, I sketched out a practice version of the lamp and chair, then drew them into a fake scene that included all the items in need of work.  I traced my pencil lines in pen, then made a small stack of copies on regular computer paper.  It’s not ideal for watercolors, so all the drafts are pretty wrinkly, but they got the job done.  Once we had looked at all the different options and made our decisions, I painted a final version in my watercolor book. 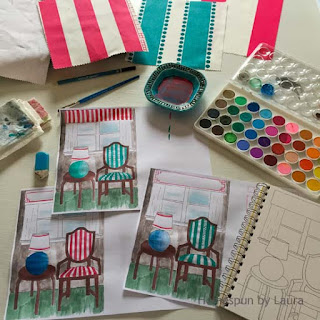 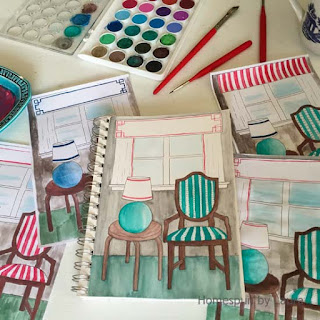 The fabric has now been ordered and is waiting for me in the office.  I was determined to get at least the window treatments done so our house-sitters would be able to use the office during our absence, but there was so much other stuff to do I never got to them.  With the increasing temperatures, it will get pretty uncomfortable in the office as the summer approaches, so people will be confined to the kitchen or dining room tables for work until we get some curtains and the new window air conditioning unit installed.

As I mentioned above, we are now in Texas, the seventh state on our trip. It’s been a blast so far, and you can read more about our trip at our site, www.48nointerstate.com  (or check Facebook, Instagram, and/or Twitter @48nointerstate).   The blog is mostly from the Mister’s perspective, so you’ll get to ‘meet’ him.  At some point (during one long day of driving or another), I’ll work on a summary of the first couple weeks of the trip and things we’ve learned about being on the road for weeks on end to share here.

As always, thanks for stopping by!