April 21, 2016April 13, 2020
A green and white striped shirt hung in the refashion closet since I bought it for a dollar over three years ago.  It finally made its way back onto my radar recently when I moved my sewing room into the new office, and I decided to refashion it and wear it on our back roads cross-country road trip.
So far, we’ve enjoyed our time on the road and the surprises that each day brings.  Though we have an outline of where we’re going and plans for how quickly we need to move on to the next town, we haven’t set a strict itinerary and have been able to make random stops when we see interesting attractions, including one you’ll read about below from the day I wore my new shirt.
See that long braid in the Before picture?  It was taken a LOONG time ago!  I’ve cut, grown, and donated my hair twice since then…
I started by removing the sleeves, cutting as close to the seam as I could. 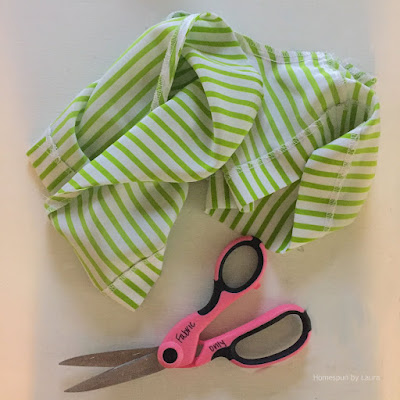 Next, I put the shirt on and marked the sides where I wanted to take them in.  Before pinning and stitching, I opened up a few inches of the bottom hem of the shirt so I could keep the original hem.  Instead of stitching a straight line on the sides, I curved it a bit, making it wider under the arms and at the hips and narrower at the waist to create a slightly fitted shirt.  I didn’t want to mess with adding darts, and I thought this would help make the shirt fall well without them. 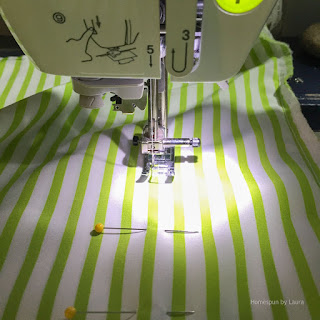 Next up were the sleeves.  I had decided to make this a sleeveless shirt, which to do properly would mean that I would use a small strip of fabric to make a small casing around it, or at least to double-fold the excess fabric on the inside.  I was short on time and decided to do it the lazy way, so if you happen to turn this shirt inside out, you’ll see some unfinished edges inside the sleeves.
To finish the sleeves the lazy/wrong way, I put the shirt on my stunt double inside out and marked with chalk approximately how wide I wanted the width of the finished shoulders to be. 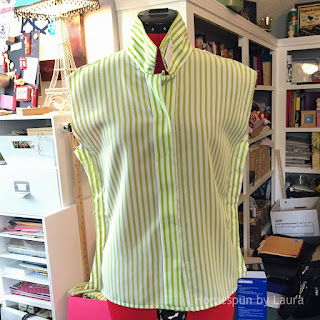 I used a tape measure to make sure that my marks were even, then started making small cuts around the arm opening, pinning the excess fabric down as I went. 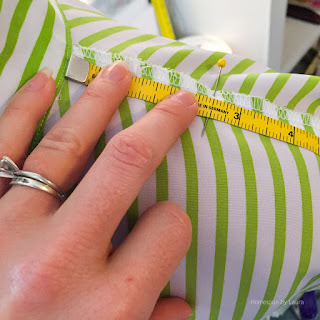 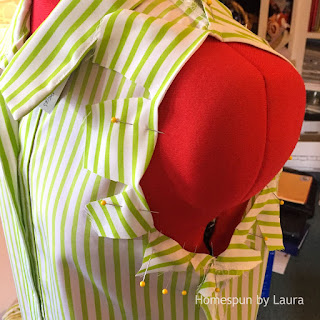 After I’d pinned it all the way around, I flipped the shirt right-side out, tried it on myself, then made a couple of adjustments (including trimming down the excess fabric from the side seams) before turning it inside out again and stitching it up. 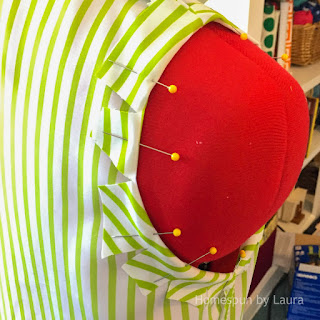 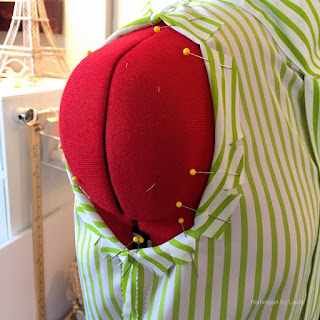 At this point, all that was left to do was trim down the excess fabric around the arms and to close the bottom hem of the shirt back up.  When it was finished, I immediately threw the shirt into my suitcase so it wouldn’t get left behind.
My new sleeveless shirt made its first appearance the day we went to Death Valley. 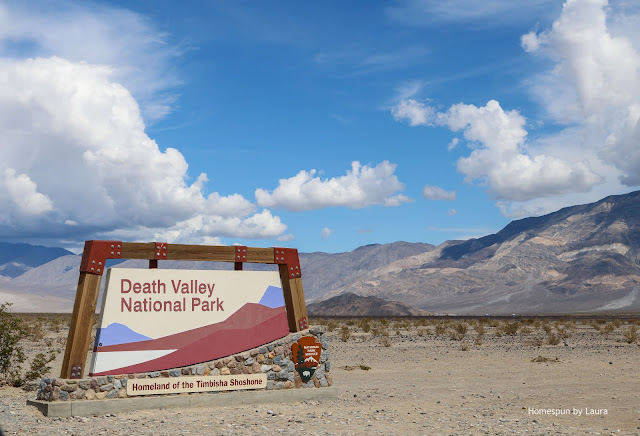 Known as both the lowest place in North America and the hottest place on Earth, it was actually quite pleasant the day we were there (it had only been in the upper 50s/low 60s the day before in LA).  The highest we saw on the car’s thermometer was 86 degrees!  It felt much hotter, though, like an oppressively hot, sticky 100+ degree August day back at home. 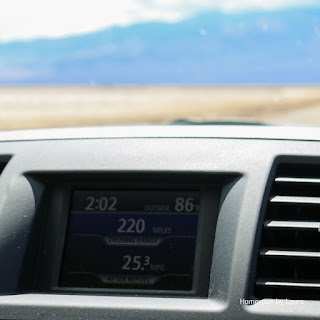 My shirt first visited the ghost town of Ballarat, CA.  As we drove toward Death Valley, we saw a sign for the ghost town and just couldn’t drive past it.  After a really bumpy drive down the 3-mile dirt and rock road, we reached the ghost town, where I found this awesome rusting truck. 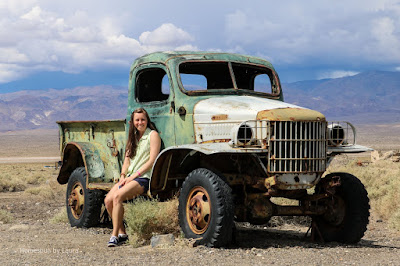 Next, my shirt jumped up in the air on the white sand dunes. 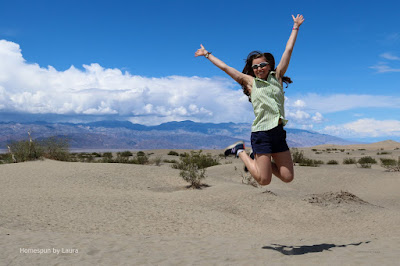 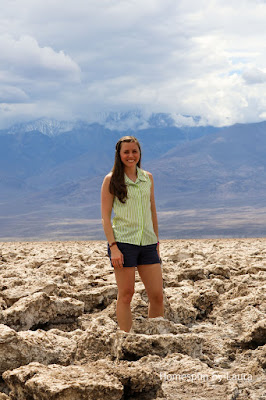 It visited the old Borax mine (and I finally learned why it’s called 20-mule Borax)! 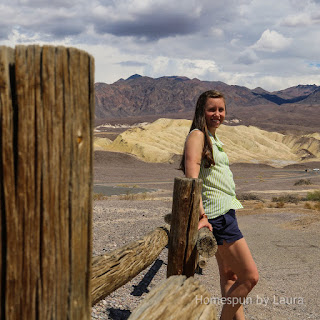 And finally, it visited Badwater Basin, 282 feet below sea level. 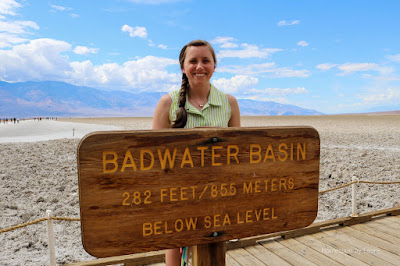 We returned to sea level soon after, where my shirt experienced its first desert flash flood. 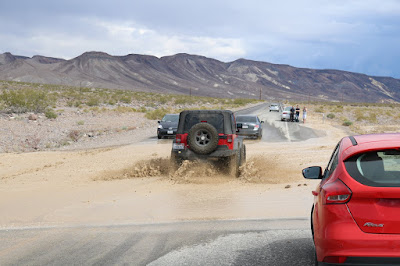 The action slowed down as we left Death Valley and California on a road so small that this was the only indication that we had entered Nevada: 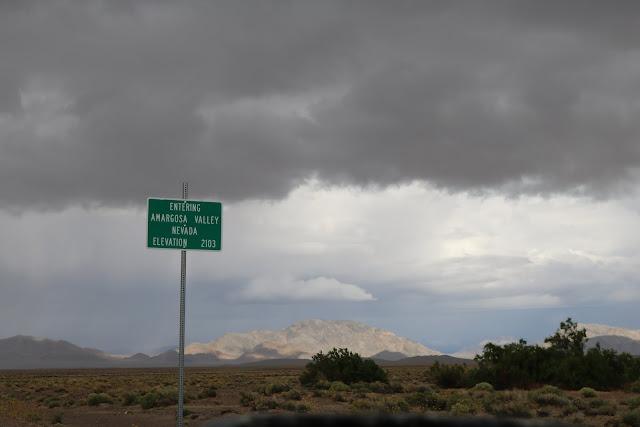 On a related side note, this week is National Park Week! Admission to National Parks is free through Sunday in celebration of the National Park Service celebrating its 100th birthday – so head to your nearest park and enjoy what it has to offer!
Thanks for stopping by!  I have several more road trip refashions to share over the next few weeks, so stay tuned. 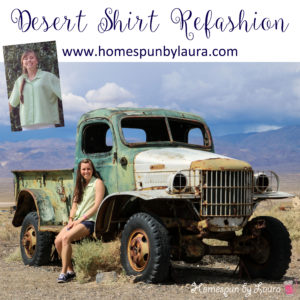