This lamp has looked a little sad for a really long time.  First of all, I can’t remember it ever working.  The theory is that somewhere along the way, its wires were accidentally cut while someone was doing yard work.  Or maybe some tree roots broke them as they grew.  Can tree roots break electricity lines?  There are several trees that were planted in my parents’ yard in the last 20 or 25 years that have grown into giants that could have done that, if it’s actually a possibility.
Anyway, the lamp has no power and hasn’t for some time.  And recently when my parents had an electrician working on a few other things around the house, they had him look at it.  They had hoped he could fix whatever was broken, but it was he who suggested that the line might have been cut.  His recommendation was to actually cut the wires inside the thing itself so it would be easy to remove the old fixture and to put in a solar light fixture instead.  This sounded right up my alley so I included it in the list of projects the Mister and I would complete during our Mother’s Day/Father’s Day Work Weekend.
We started by disassembling the top of the fixture on Saturday morning.  It turned out to be comprised of six separate glass panels held together by little posts with tiny screws on the top and bottom of each.
The top and bottom of the lantern part came off the post, too.  This allowed me to easily paint the actual lamp post, which needed some paint badly.  But first, I gave it a little bath with a damp cloth.  It was really dirty!
It’s hard to see in the Before pictures because I forgot to do a full-length Before picture, but one of the little arms that sticks out of the post has been missing for several years.  The one that remained was dangling at an angle – and even when they were both there, they both dangled, if I remember correctly.  The best replacement solution seemed to me to be a single piece of PVC pipe with end caps, if we could find some in the right size.  I took the one remaining arm to Lowe’s and we found what we needed, which was a ½” pipe and two ½” caps. 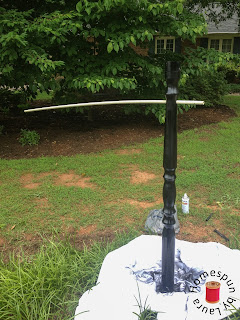 After I had done the first coat of spray paint on the post, I stuck the pipe through the arm openings and lined it up to prepare for sawing it down.  Cutting it down into only one length instead of two would give it more support and prevent it from ever drooping like the two arms used to droop.  I used a very technical and precise tool to even up the sides and ensure the pipe was about even on each side: the back of my hand.

The problem arose on Sunday afternoon when I finally got back around to the lantern part.  It had been over 24 hours since we had disassembled it, and I sort of forgot how it was put together – but I didn’t realize it until I had already made some progress in the wrong direction.   I was able to recover and it’s not a huge deal, but it bugs me that I did it wrong.

I started this part by sanding down the metal pieces, then washing and drying them thoroughly.  I scrubbed the glass pieces, too (they were filthy!), and set them aside to dry on their own while I worked.
The Mister was creatively engineering some facets of the third project at this point, so my mom came out to the garage with me to assist.  She has a surprisingly impressive collection of tools, so she found what I needed when I needed it, like a surgeon’s assistant.
Selecting a solar light to insert into the lantern was a bit challenging since the lantern has a lid on it that doesn’t allow sun to directly shine on a solar panel if the panel is on top of the new solar light insert.  And, of course most of the lights we found at Lowe’s were shaped this way, with the solar panel on the top.  I don’t know much about solar lights or how much direct light they need, but I didn’t want to do all this work only to have the light not work!   So we found one that had the solar panel underneath the bulb, thinking that having it lower in the lantern would allow for more light to find its way to the panel.

This solar light had a base that was about 1½” in diameter, so I had to widen the opening on the bottom of the lantern an extra inch or so to allow it to fit through; it had previously only been wide enough for the electric wires to fit through.  I used some wire cutters to cut the metal into small sections that could then be pulled back with needle-nose pliers and kept peeling until the solar light base would fit through it.

Next, I removed what I thought was part of the light socket but was, in fact, the part that allowed the lantern to attach to the top of the post!  It took some elbow grease to separate the two pieces, and fortunately nothing broke in the process.  After I had disassembled it… I threw the base piece I thought I didn’t need into my parents’ recycling bin.  I didn’t actually know if it was recyclable, but I thought I’d give it a shot (I’m so glad I didn’t put it in the trash can. What if I’d had to dig through the trash to retrieve it when I finally figured out what was going on? Gross!).

Then I laid all the metal pieces out, sprayed them with silver spray paint, and went inside to help the Mister with the third project while they dried.

We wound up staying an extra night to finish up the last bits and pieces of our projects on Monday morning.  So Monday morning after eating breakfast, packing up,  and slapping the third and final coat of polyurethane on the step, I went out to reassemble my lantern…and I realized that I had made incorrect assumptions on the way the thing needed to be reassembled and that I actually needed the little base piece I had broken off the bottom of the lantern and thrown in the recycling bin.  But Monday is trash and recycling pickup day in my parents’ neighborhood!  And it was after 10 by this point!  In my neighborhood, the truck often comes by as early as 9:00, so I had no idea if the piece I needed was still there!
I got so lucky on this one.  The recycling people came about 45 minutes after I retrieved the piece from the bin at the end of the driveway.  I pretty much skipped back up to the garage!  I actually don’t know what I would have done to fix the problem if they had already come.  I know I would have come up with something, but it wouldn’t have been easy and would have taken some really creative thinking.  And time.  I guess the lesson here is to never dispose of a component of your project, even if it seems like garbage, until you’re completely finished!  And to always look at any Before pictures when putting something back together!
So what happened was this: I had assumed that the bottom piece of the lantern went one way…but it turned out that I had it upside down.  So all the metal that had been neatly curled down…had actually been curled UP.  And I knew there was no way I was going to be able to reverse it and curl it DOWN without risking it snapping off.

So I was stuck here with curled up metal, and I also had to reattach the base piece to the bottom of the lantern.  I curled the excess metal of the base (that I had previously un-curled) back around the opening of the lantern bottom, and then the Mister helped me find three teeny little screws to securely fasten the two pieces together, since I had broken the brads when I separated them.

The worst part is that you can see the curled-up metal from the top, instead of a nice smooth transition with the curled metal hiding underneath.  Most people will not notice this, but of course, it’s the first thing I see.

I reassembled the then-complete lantern with the new solar light inside it and went out to screw it onto the post.  It looks totally different now and according to my mom, several neighbors have commented on the change.  And not one of them has noticed the curled-up metal. 🙂

There’s one teeny issue with this light.  My mom and I thought it was strange that this was the only solar light at Lowe’s that didn’t say how many lumens it was or where it fell on the blue-to- yellow-light range; it said nothing but that it was a solar light.

The Mister and I had to leave before lunch that day to get back home for him to work, so we didn’t get to hang around until that night to 1) Find out if the light would work or 2) Find out that it did work, but that it’s actually a color-changing blue-green-red light!  It doesn’t quite fit in my parent’s neighborhood, but it has been this way for about a month now and no one has complained yet that I know of.  We do need to change it out though; that’s not the look we were going for!  Once vacations are over, I’ll go out in search of a light that fits all the requirements:  a solar panel that the sunlight can easily find, silvery/brushed nickel color, and the right look to go inside the lantern.  Until then, it will be a bit Griswold-y at nighttime.

Up next, the project that my mom was the most excited about and looks pretty cool in their kitchen:  a new shelf over the microwave.

Thanks for reading!
Laura

Jack of all trades; master of none.
DIY. Sewing. Travel. Drawing and fabric design. Mama to two 🎀.

This morning I couldn’t find my phone. For about

This gallery wall above my sewing machine has been

This project is getting so close! This afternoon

I didn’t *quite* finish the four projects I set

I put my best assistant to work this morning as I

We’re within 2 months of this baby’s arrival,

Are you really a parent if you’ve never been out