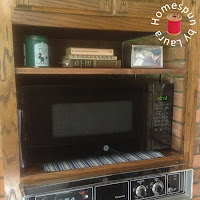 The third and final project that we completed for our Mother’s Day/Father’s Day Work Weekend last month was to create and install a shelf above the microwave in my parents’ kitchen.  For the first 27 or 28 years that we lived here (it just feels weird to only say ‘they lived here’ and exclude myself from it even though I moved out over seven years ago), there was a giant built-in microwave.  A couple years ago, though, it finally died, and my parents had to buy a new one.  The new one is much smaller than the first and looked so lonely in such a large opening.  And when my dad sawed off the wooden trim to remove the old broken microwave, some of the trim turned out a little uneven and needed to be smoothed out.
My mom had been talking for a few months about someone putting in a shelf over the microwave, so this was the third and final project that made it onto the weekend itinerary.
We started by taking measurements for the wood piece and deciding what size corner braces we should get to hang it.  During the first of approximately five trips to Lowe’s and Home Depot we made that weekend, we picked up a Stain Grade Wood panel for shelving, which the folks at Lowe’s cut down to the right size for us, 2” corner braces, and some stainable wood filler.  I had also suggested that we should install a little light above the shelf, so we picked the best one for the job – it could plug in to the same outlet as the microwave, and it was thin enough that it could hide behind the upper lip of the trim area above the shelf.
The first thing I did on this project was to fill in the rough, uneven areas with wood putty, smoothing them out the best I could and sanding in between each layer until I was satisfied.  I forgot to pack my putty knife and my parents don’t have one, so I made do with a plastic knife. 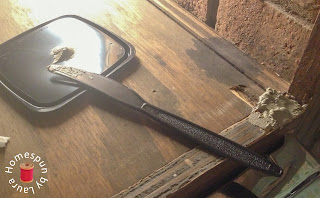 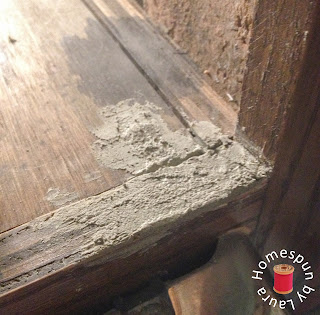 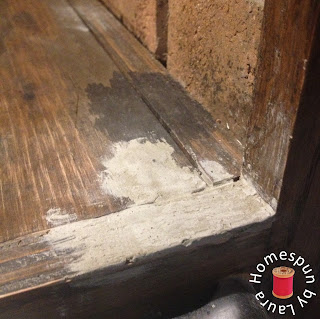 Between layers of wood putty, I darted back and forth from the kitchen to the garage (making sure to jump over the step while it dried) to stain the wood piece or to work on the lamp post.  When the wood putty had finally dried enough to be stained, I headed back in to do that.  This step was a little bit troublesome because the gray color of the putty kept showing through, even though the package said it was stainable.  I finally got it to a place where I was OK leaving it, knowing that my mom won’t notice it as much as I do; she’ll be looking at the new shelf instead of the trim.
The shelf itself had to be stained with a method similar to the one I used to stain the step.  With the shelf, I alternated between coats of Special Walnut and Red Mahogany to get the right color, which is more of a walnut than the step was, but not quite as walnut-y as the Special Walnut.  I took one of the kitchen drawers out to the garage with me so I could compare my work against the existing cabinetry l as I went.
When the color was finally just right, I added a couple of coats of polyurethane on the shelf and the framing around the microwave where I had stained.
After everything had dried, the Mister started drilling the screws for the corner braces.  The sides of the shelf area are made of brick, and he had to make a couple trips to the store to get just the right drill bit (a masonry drill bit) and screws (masonry anchors, regular screws).  The shelf didn’t sit exactly level because the mortar, where the corner braces were installed, wasn’t exactly level on each side.
We got creative here and avoided making another trip to the store by cutting a small piece from a large paint stirrer and a small paint stirrer to level out the shelf.  We sandwiched them between the corner braces on one side to even everything up – the large one was on the back brace and the small one was on the front brace.
The most trying part of this particular project was that we had to install and uninstall the shelf about three times before everything was situated properly.  The first time, it was because the light was installed too far back on the roof of the shelf; it shined in your eyes as you walked by if your eyes were lower than the shelf.  The screwdriver was too long to unscrew the light with the shelf in, so out came the shelf.  The second time, we tried getting the microwave into place and realized there wasn’t enough of a gap in the back for the microwave plug to reach up to the outlet, so out came the shelf for a second time.  The Mister sawed a chunk out of the back of the shelf to create a space for the plug to fit through.  The third time, the little chunk the Mister had carved out still wasn’t enough to allow the plug through, so out came the shelf…again.  The most frustrating (and also risky) part of this was that the shelf wasn’t just sitting on top of the corner braces; it was screwed into them (and through the paint stirrer sections!).  So each time we took it out, we had to unscrew it, risking stripping out the screws and splitting the paint stirrers.  Also, it was wider than the front opening, as there is about a half inch of wood creating a kind of lip on both sides, so we had to actually take out the corner braces on one side each time we removed the shelf!  It was quite a frustrating process, but we finally got it right.  And it looks great.  And my parents love it.  And it looks like it was supposed to be that way in the first place.  So I’d say it was a success!
After the fourth installation of the shelf…we were quite happy to be finished!
While my parents took all the little dogs out for a potty break, I grabbed a few things from around the kitchen to stage the new shelf; when they came back in, this is what was waiting for them! 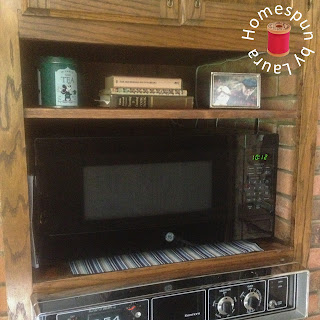 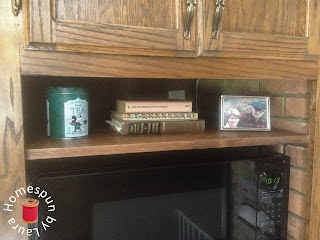 In addition to all the work we did that weekend, we also had a little time to play.  We also grilled steaks, played Catch Phrase, clustered around the TV for 2 minutes to witness history as American Pharaoh won the Triple Crown, and watched half a movie with my parents.  The movie was Patton, which is quite long, so it was probably a little optimistic to think we’d have time to watch the whole thing in addition to doing all the work!  We enjoyed the weekend with them and getting work done that has been talked about and needed for years, and we plan to finish Patton in the near future.
That completes this 3-part series; I hope you enjoyed it!
Laura