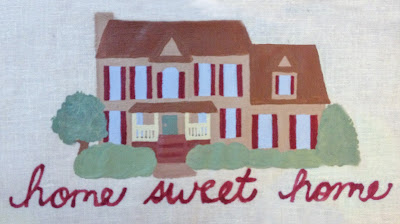 When we moved into our house in March of 2009, we were both 23 years old and knew nothing about homeownership or maintaining a household.  We were excited to have a place of our own at such a young age, though, and over a period of about six months, we got most of our boxes unpacked and began to feel settled.

In addition to the furniture we brought with us from the apartment we lived in for the first eight months of our married life, we inherited a good bit of furniture from my grandmother and brought some with us from our childhood homes.  This combination filled a shocking amount of space, so there wasn’t a need to buy much, which was good, because we didn’t have a whole lot to spend!

Neither one of us wants a house that looks like it belongs in a magazine.  We don’t think it’s necessary to pour a lot of money into expensive furniture or renovations.  But of course we wanted to make our house feel like our home, so for the next couple of years, we arranged, then rearranged what we had, and bought a small bit of additional furniture (all from Craigslist or thrift/consignment stores).  In fact, the only furniture we’ve ever bought new is our couch and mattresses!

Naturally, my interest in decorating has led to a LOT of do-it-yourself projects based on pictures I see online or ideas that swirl around in my head until they burst out into a project of their own.  Most of the changes we’ve made here have been perfect; some I’ve questioned after completion.  But all of them have made the house feel like our home.  We’ll see which ones stand the test of time and which ones provide an opportunity to try something new.

I’ll start by sharing what our house looked like the day we bought it and the changes that we’ve made over time.

Let’s start in the kitchen.  It wasn’t necessarily the nicest kitchen in all of the seven houses we toured before making a decision, but I loved it because of the big window, white cabinets, pretty blue walls, and island, which we just assumed was included with the house since it had been vacant for a year.  Looking back, we probably should have written it into the offer to be sure, but it all worked out in the end.  It had older appliances, which we replaced with shiny new stainless steel versions over the next two years.

I’ve made two major changes to the kitchen.  The first was to paint the island.  It’s awesome now and I love it.  The faux marble top I painted has held up well, but after four years of heavy use, it needs some attention.  I’ll either give it a light sanding and cover it with another coat of Polycrylic or strip it back to the original butcher block, which would also look awesome with the navy paint. 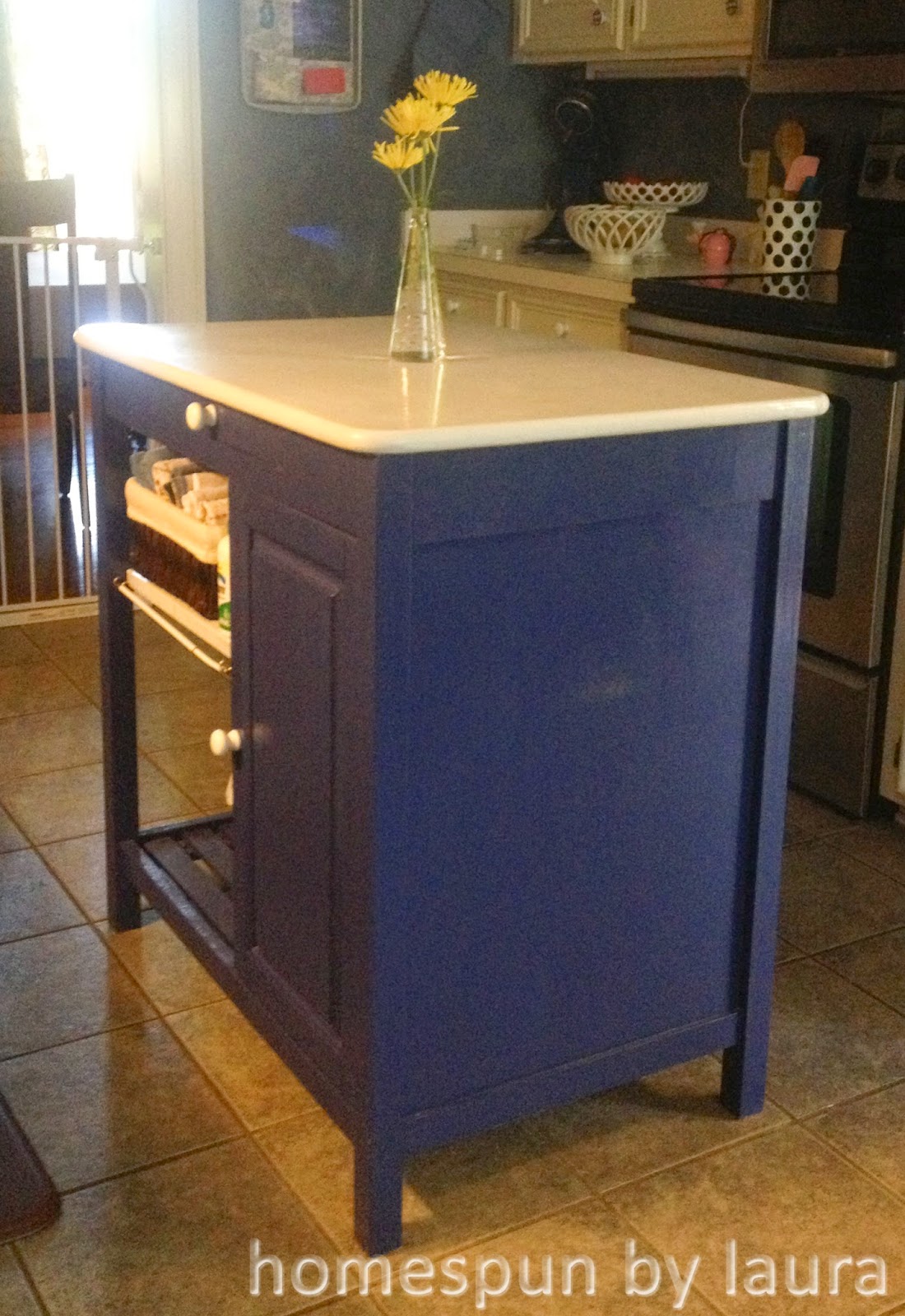 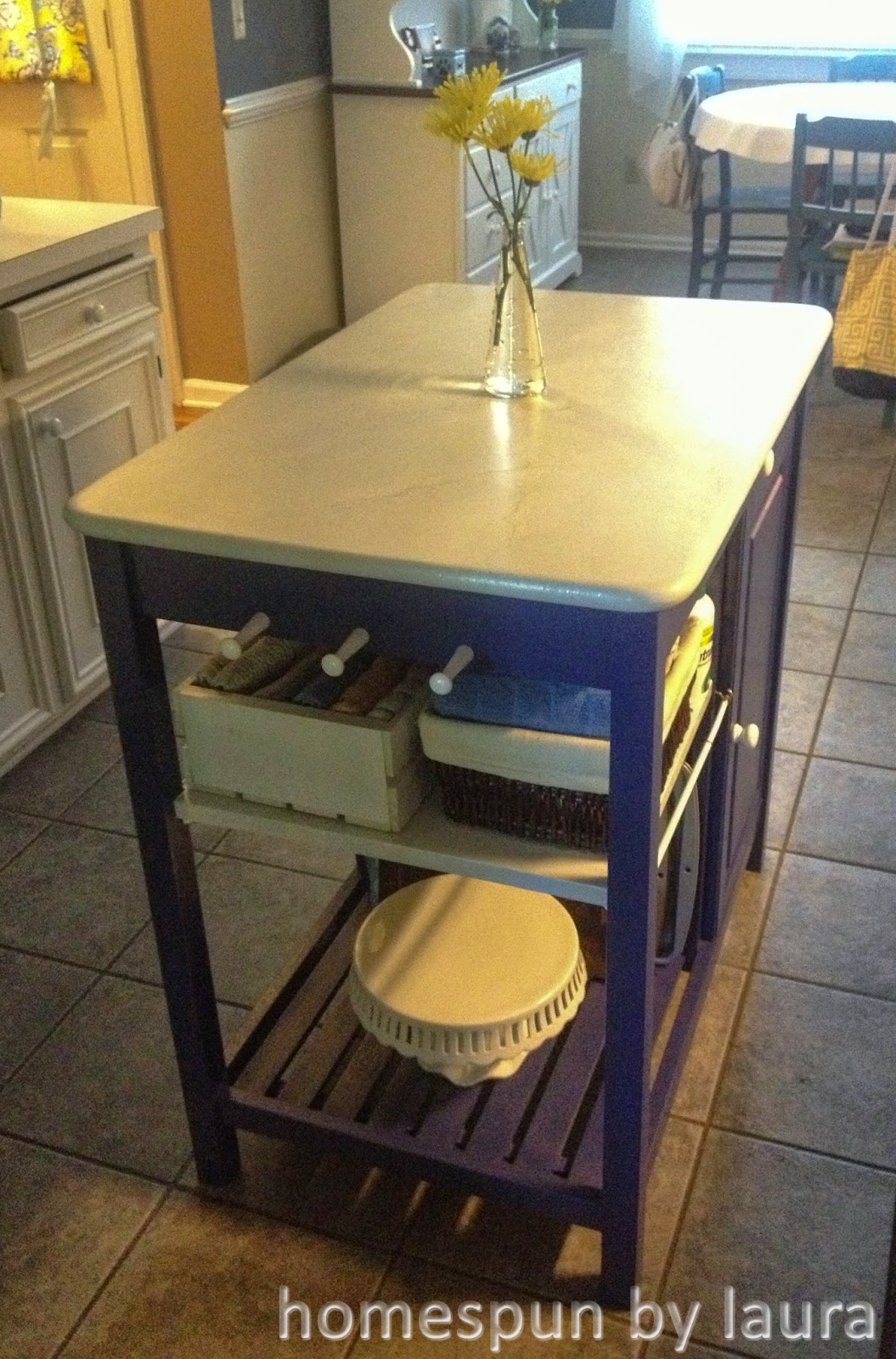 The second was to add a hutch to the eat-in side of the kitchen.  I searched for the right piece to paint and make my own for ages, and my patience paid off with this beauty. 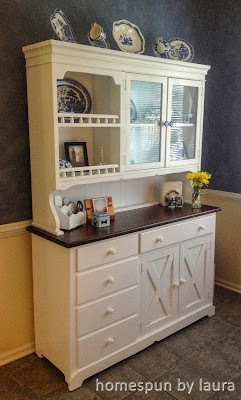 I’ve always wanted to replace the laminate countertops with butcher block (or marble or soapstone, in my dreams!) and put in a subway tile backsplash, but that’s another project for another day.

Next is the dining room.  We filled it with family pieces, mostly antiques from my grandmother.  The focal point is the antique French dining table, which came back to the US with my dad’s family after his father was stationed there with the Army in the fifties.  I was not a fan of the wallpaper and strongly disliked the funny valances that the previous owners so kindly left for us, but it stayed like this for four and a half years until I finally made new curtains and painted it in 2013.

Next up is our den.  Its strange long layout and closet smack in the middle of the wall across from the fireplace made it difficult to figure out the best way to arrange furniture.  It took us six years to come up with a layout that really worked in this room.

The updates began in about 2010 with new paint – and then took a five year hiatus.  All the scheming going on in the back of my head finally came together in 2015, the year that a lot of small changes came together to transform the room.  We bought a new couch, I FINALLY made matching curtains for all four windows, painted and stained our stair railing, and reupholstered the big armchair we bought soon after moving in. 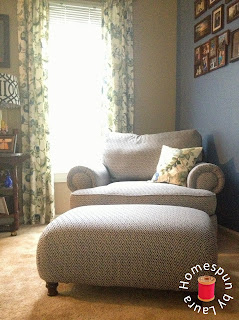 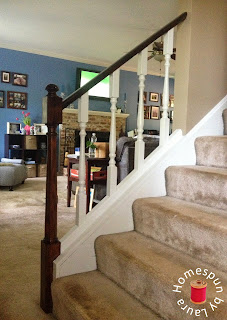 Then my father-in-law graciously lent his woodworking skills to help construct one of my favorite pieces:  a coffee table made from an old window. 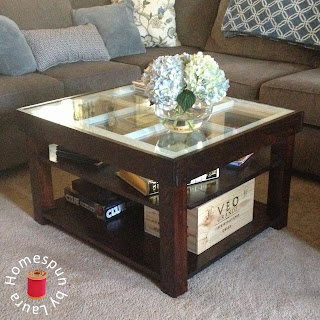 Read about all the changes in the den here.

The most recent room to receive a makeover is our home office/sewing and craft room, which had become the room where we tossed stuff we didn’t want to get rid of but didn’t need or know what to do with.

I participated in the Fall 2015 One Room Challenge, hosted by Linda of Calling It Home – and made more changes over the course of six weeks than I ever could have made during that short a time had it not been for the ORC.  While many changes happened during the course of the ORC, the room still wasn’t complete by week 6, but it had become a functional office space for me.  A change in the Mister’s job about a year later meant that he now needed a work-from-home space, too.  So when the ORC rolled around again in the Spring of 2017, I joined in for motivation to finish this space once and for all. Read all about this two-year process here. 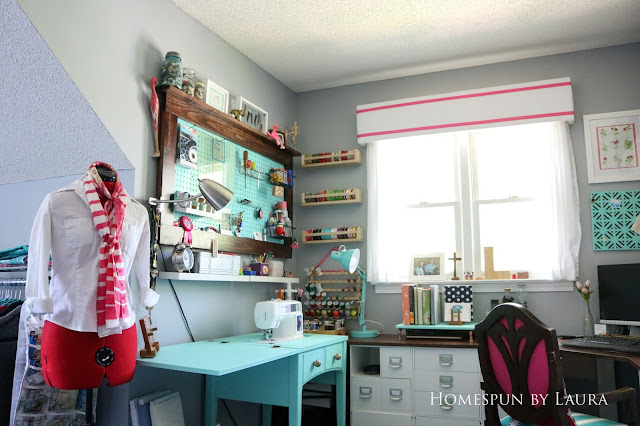 It both looks and functions so much better now! 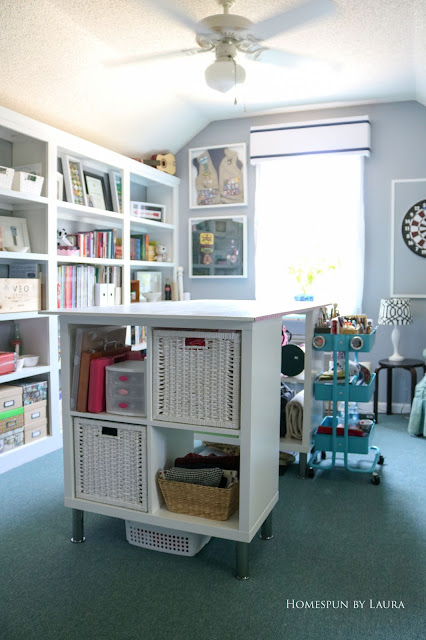 And the Mister got his own desk (rather, he stole my old one so I made a new one). 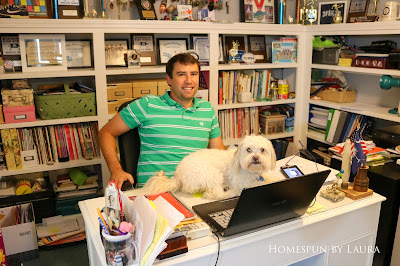 And last, for now, anyway, is the laundry room.  It was BRIGHT RED and it had a weird garden-themed wallpaper border around it with a valance over the window that didn’t match the border or the wall, which didn’t match each other to begin with.

At the time, I wasn’t up for any painting projects, so I looked around for an option to cover the garden-themed border and was rewarded with a cute chef-themed border.  I loved the chefs, and they looked great with the wall, so I decided to make them work, even though it’s a little strange for a laundry room to be decorated with chefs.  I found a cute chef clock and a few other chef decorations and called it a day.  The ugly valance stayed for a few more years before I made a pretty roman shade to replace it in 2014.

This is one of those projects that you look back on and think, “That was a weird choice.”  They were a great band-aid while I worked in other areas and pondered a better option for the laundry room, and I am keeping some of the fun chef decor to use somewhere else.  In 2016, I finally got a laundry/mud room plan together, and the change has been wonderful.  It’s a much more peaceful room to come home to. 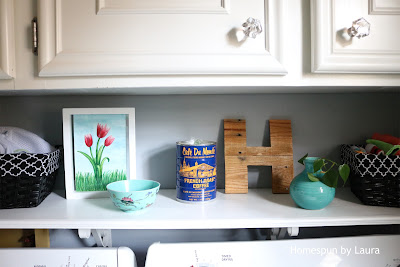 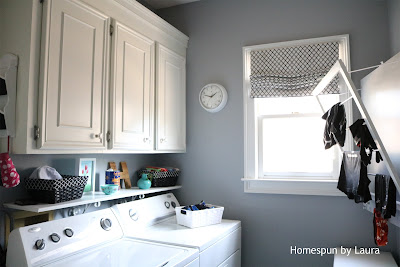 While you can’t always have the house you want, you can make the house you have into a home one small project at a time.  What I’ve learned over the past eight years is that making a home is a process that doesn’t need to be rushed or involve huge construction projects.

I hope you enjoyed this episode of the ‘Homespun House’.  To see all posts related to our house, click here. Hello! I'm Laura. I use antiques, thrift store finds, and a heavy dose of elbow grease to make our house a home, and I write about it here at Homespun by Laura. From DIY to sewing, you'll find solutions to your home decor dilemmas! Pull up a seat and stay awhile!

This error message is only visible to WordPress admins


Error: Access Token for is not valid or has expired. Feed will not update.